Since Ashley so kindly asked for more of Little Bit, I figured I should write a post about that. And him.

First of all, he’s still amazing. He made the flight to Oregon with nary a peep.
If you don’t count the diaper blow out on the way.
Which just makes me smile because I wonder how many of those nasty things I had to deal with over the past almost-(GULP!)- 30 years?
You know the ones …… everything slides right up the back, and/or out the leg holes.
So.
Much.
Fun.

We bought him a little tuxedo onesie to wear to the wedding today, so I’m hoping to get a really cute pic soon.

Now about those pics …… we are prohibited by law from publishing his name and his picture. Or anything else personal about him.
Thus …… no pictures since I left.

I’m hoping to figure out how to edit some newer ones so that I can post them.
Now, if I know you personally then I can show you pictures of this amazingly cute baby. But other than that, I’m sorry.
And really, it’s totally killing me to not be able to show you how ever-lovin’-cute he is!!!!!

There are a few other things that are required of me, other than not publishing pictures.
Today I went to a CPR/AED/FA class.
This is so that the foster system will trust me to stay with him, but only for up to 72 hours. After that, he gets snatched away and taken to people who’ve taken training to provide “respite” care.
Needless to say, Daughter #2 isn’t going anywhere more than 72 hours away.

OK, I just had to stop and squeal quite loudly.
That’s because D2 just sent me a pic of him in the tux/onesie.
I can NOT stand the cuteness!!!!

OK, where was I?
Ahh, yes ….. requirements to hang with foster kids.
The CPR course.

So I perused the internet to find just the right class.
And I did.
Or so I thought.
It was called FUN CPR!
Now you know me …… give me a choice between regular and fun, and I’m going to choose FUN every time.

So I walked to this office/Asian church/Asian funeral home and got there before 10:00. (The email said that the doors would be locked promptly at 10:00).
WHATEVER!!!
There were Asian people, dressed in black, coming and going and mostly meeting in one room for a service.
Then there were four of us who weren’t Asian, who were waiting for the FUN CPR class to start.
We waited for an hour. No word at all from the teacher. The receptionist said he’d never been that late and wasn’t it just too bad that she didn’t have his cell number?
REALLY?!!

One of the four found another teacher near by and called him. Surprise, surprise ….. his students had not shown up this morning. No, he wasn’t ours and we weren’t his, it was just plain serendipity.
So we walked over to his office and took the class. And he ended up being hilarious.
I passed.
🙂

So far, my fingerprints and my background check have turned up nothing ……. in this country anyway. ;-p

I’ll see if I can edit some pics of him for you.

Until then, here are some pictures of Matthew Broderick and Rupert Grint (Ron Weasley in Harry Potter), Megan Mullally, Stockard Channing and F. Murray Abraham from the play last night.
I have to admit that the last several pictures were taken under the cover of darkness and sneakiness. But they were soooo close that I just HAD to!!!

Hopefully one of you can come bail me out some day.
Wherever I end up.

This is Stacey Keach, who was sitting a few seats from me at “You Can’t Take It With You” with James Earl Jones. 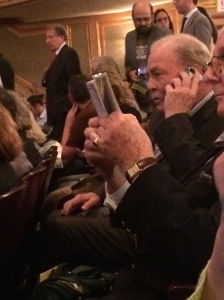 This is Stockard Channing, though difficult to see clearly.

Nathan Lane, who was so dang close!! 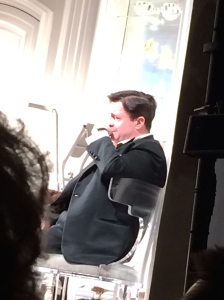 It took me several minutes to recognize Megan Mullally (Will and Grace) because she’s lost a great deal of weight and was blonde in the show.

Curtain call:  2nd from the right is F. Murray Abraham 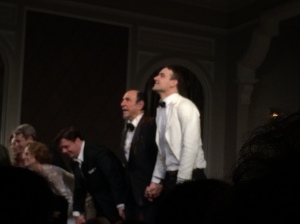 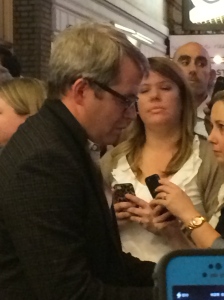