I’m going through withdrawal.
I kid you not.

I have told Daughter #2 that she has to send me at least one picture every 24 hours.
They’re my crack.

I start feeling restless and cranky when I don’t hear from her. It’s gotten so bad that when she sent me a picture this morning (from an airport because they’re on their way to Oregon …… actually they’ve landed safely by now), my eyes got all teary.
I miss that baby …… physically. When I see pictures of him I wish I could climb into them and grab him.
If anyone knows the secret to doing that, I’d make it worth your while to tell me.
Word.

But in between times of the DT’s, I’m loving being back in NY.
Barre class is still kicking my butt, but I’m very, very close to …… enjoying it.
I KNOW!!!

You know how some people love pain? I think it might kind of be like that.
I like feeling stronger, but I’m not really liking my muscles growing bigger. My calves are larger and very defined, as are my upper arms.
And since my muscles seem to be getting larger, I’m not losing any weight.
At all.
Not.
One.
Pound.
And that almost makes me hyperventilate.

I’m doing Barre for an hour every other day. Almost every day I walk at least 2 miles. Today I walked 2 miles and then biked 5 miles.
It’s getting depressing.
And infuriating.

It seems that at this stage of life, I have absolutely no control over how my body looks. I’ve always heard the horror stories of women and menopause and fat around the middle. But I never really paid that much attention because I seemed to stay fit enough playing tennis and walking.

But no more.
And I’m here to tell you that those horror stories are true.
Damn it.

In other news, I saw a great Broadway show the other night. It’s called “You Can’t Take It With You”, and it stars James Earl Jones …… you know, the voice of Darth Vader?
It also stars Rose Byrne, who was the wealthy best friend-wanna be in “Bridesmaids”. She was cute.
Mark Linn-Baker, from the 80’s sitcom “Perfect Strangers” was also in it, as was Elizabeth Ashley, whom I hadn’t seen in anything in a long time.
It was hilarious and I’d definitely see it again.
That means I highly recommend it.
I also had this guy squeeze past me as he went to his seat on my row. He even said, “Excuse me.”
And the best part is …… I recognized him!!! And then I remembered his name!!! Ten bonus points for me because I rarely recognize celebrities. In fact, I spotted two that day!
Here’s a pic of Stacy Keach, who sat a few seats down:

Tomorrow night I get to go see “It’s Only a Play” with Nathan Lane and Matthew Broderick.
I can NOT wait!!!
Here’s who else is in the cast:
F. Murray Abraham
Stockard Channing
Megan Mullally
Rupert Grint

This is the hardest ticket to get right now. However, when you only want one, it’s a bit easier.

On Monday I went out to the Statue of Liberty and Ellis Island.
I’d been to the statue a few decades ago …… and up it. But this was my first time to visit Ellis Island and it was quite interesting.
We had beautiful weather, even if it was a bit blustery.

This is Ellis Island, through the trees:

A picture of a boat full of immigrants: 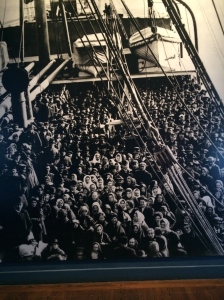 This is a part of the wall that people wrote on while they waited to be seen by the doctors on Ellis: 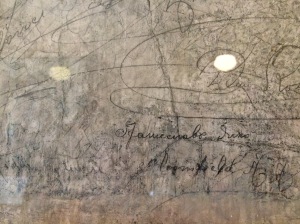 This is from the gift shop.  Because who wouldn’t want a Statue of Liberty bear?

Or a tacky Barbie? 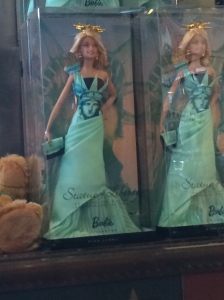 Or, even better …… a Statue of Liberty monkey.  Because nothing says American patriotism like a monkey, right?
Sheesh. 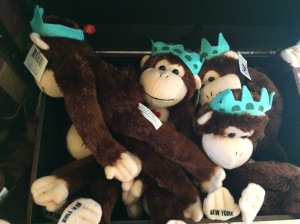 The entrance, that millions of immigrants entered upon landing on Ellis.

Afterwards we went to lunch at one of the best barbecue places I’ve been to ….. in and out of Texas!

It’s Hill Country Barbecue and it’s HUGE!!! Especially for NYC!! Most restaurants here barely fit 10 tables. But this looked like we stepped right into Texas when we walked through the door!

Today I decided to walk to the New York Historical Society Museum. It was another gorgeous day!!  I took pictures of a few churches and interesting buildings on the way. 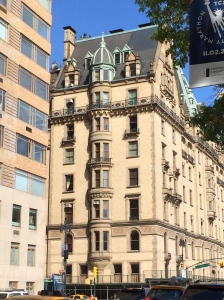 I just thought this was a cool tree.  So I took a pic.

And these Ugg booties made me think of Little Bit …. so I took pics and sent them to Daughter #2.
I didn’t buy them.
I’m not entirely crazy.

Although I can always go back.
🙂

Have a great weekend, Peeps.
🙂

And thank you to each and everyone of you who has joined Jim’s team and/or donated. It would be amazing to know that no other person will every die from an aortic dissection …… and that no family will be torn asunder because of that damn event.
I think it’s a great goal.