…… there’s sometimes a bit of light.

Or maybe that’s just here in NYC when there’s a blackout. 😉

So yeah, I lived through the blackout of 2019. Of course, it’s easy to live through it if you’re not stuck on a subway train, or an elevator (like some in my building).
It might also help that it only lasted 5 hours. But hey, those were 5 very long, hot and exhausting hours. Especially when you have to climb down and back up 20 flight of stairs.

So yeah, I’m a survivor.
Now I just need to find a t-shirt that says that.

Here are some pics from the aforementioned blackout.

This is me after getting a text from some neighbors about the power outage to the building.  And then another text saying that it was from Midtown to 72nd on the Upper West Side.  I live at 63rd.  At this moment I had just finished a 2 1/2 hour walking tour (wearing the wrong shoes) and was tired, hot, sweaty and 3 1/2 miles from home.  With sore feet.

I walked a while and then finally found a cab driver who didn’t seem to know about the outage.  Score! Because if he’d known, he never would have agreed to take me “as close to Columbus Circle as you can get”.  He looked at me rather oddly when I said that.  And then I confessed why.  He and I became good friends.  Trauma does that to people, you know.  As do dangerous situations.  We’ll never see each other again but for a while we were best friends, surviving the carnage together.
Too much?

Aaanyway, he got me a little more than halfway there so I gave him a good tip and bade him goodbye.  And headed home.

This is the dark Time Warner Center at Columbus Circle.  Odd to see it dark in the daylight. 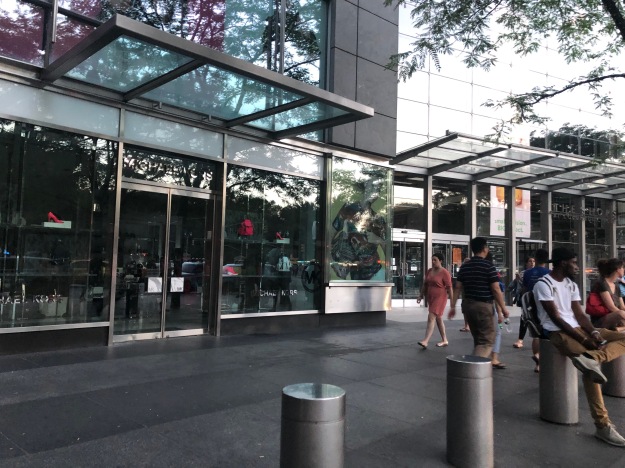 These are the people who had been in said TWC and were now just hanging out, waiting to see what would happen next. You can also see the people congregating in the Cirlce across the street.  It was getting crowded.

This is the other side of the Circle, where the steps leading down (or up) from the subway are.  A happenin’ place right about then. 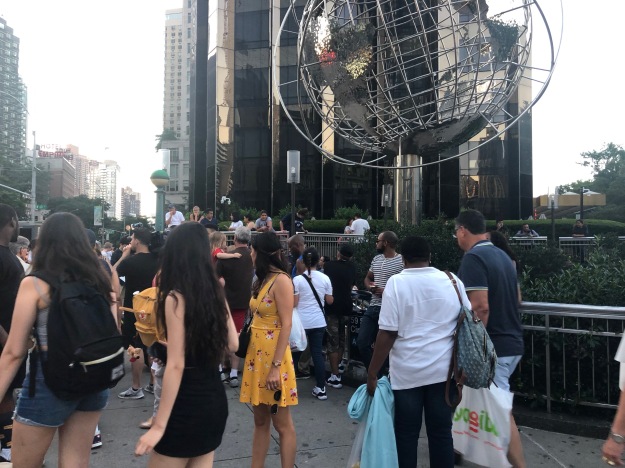 These are the people who had been stuck down there on those trains and in that dark subway station.
I’m glad I was with my good friend, the cab driver. 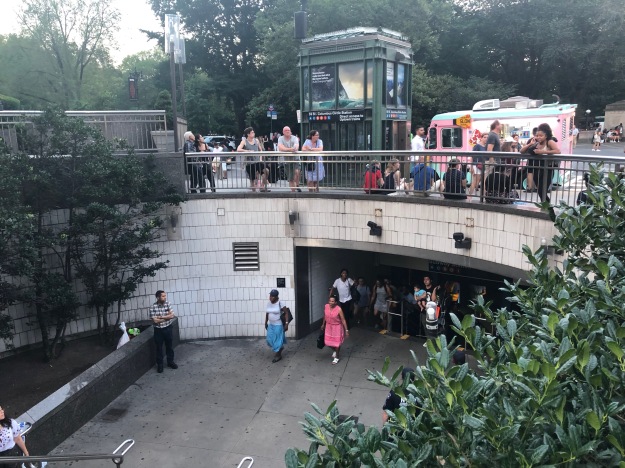 These are some of NYC’s finest, keeping dumb people from going down into the dark subway station and trying to tell other dumb people that they have no idea when the power will be back on.  Do their uniforms say “Con Ed”?  I don’t think so. 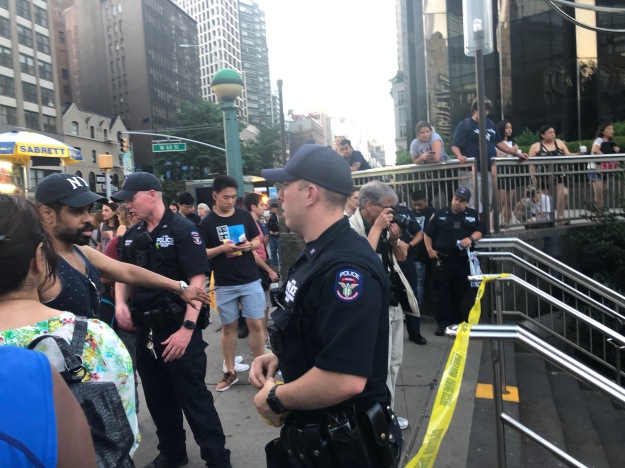 This was the sign on the door of West Elm.  I found it amusing.  All of the stores, restaurants, cafes, etc. were closed.  ALL of them. But it was nice of West Elm to sign it.

This is the view of my building as I was walking up to it.  Notice that some poor souls were already opening windows.  I tried that.  For about 50 seconds.  It was so hot and humid out that I couldn’t take it.  Not to mention the constant, and I DO mean constant like I’ve never heard, sound of the sirens screaming past the building as firemen, police and ambulances rushed to free people from elevators and rescue others who needed electricity for things like oxygen.  You know, survival necessities.

This is my lobby.  With no light.

This is the view of Columbus Circle from my apartment, at dusk and with no lights. Well some lights, but very few in buildings.
Did I mention that my apartment is on the 20th floor?  I did?  Well, good.  Because it is.
And that stairwell was very warm.

Here’s the view of Columbus Circle after dark.  So weird.  Some buildings had generators.  Lucky them. 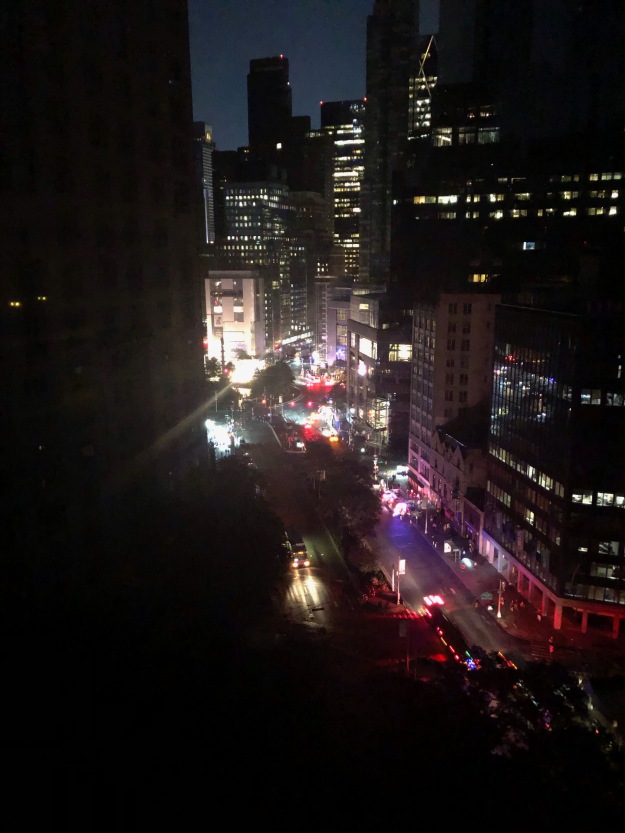 This is a dead flashlight, thus proving that its name is a lie. I spent quite a bit of time looking for it, then put fresh batteries in it only to find out that it was going to be of no use to me at all.
Stupid flashlight.
(I now have 2 new flashlights and a lantern sitting on my dining room table, courtesy of an irate shopping spree on Amazon, in the dark.  I’m sure I’ll never have a use for them.) 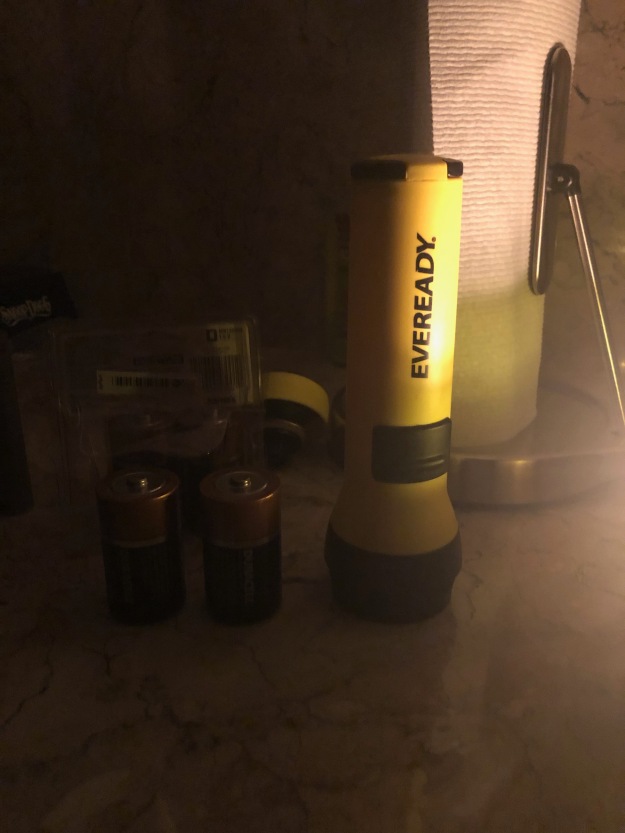 This is the candle that I chose to light before I found the perfectly useless flashlight.  I’m not sure if it helped with my stress level, but it smelled good.
It was also hot. 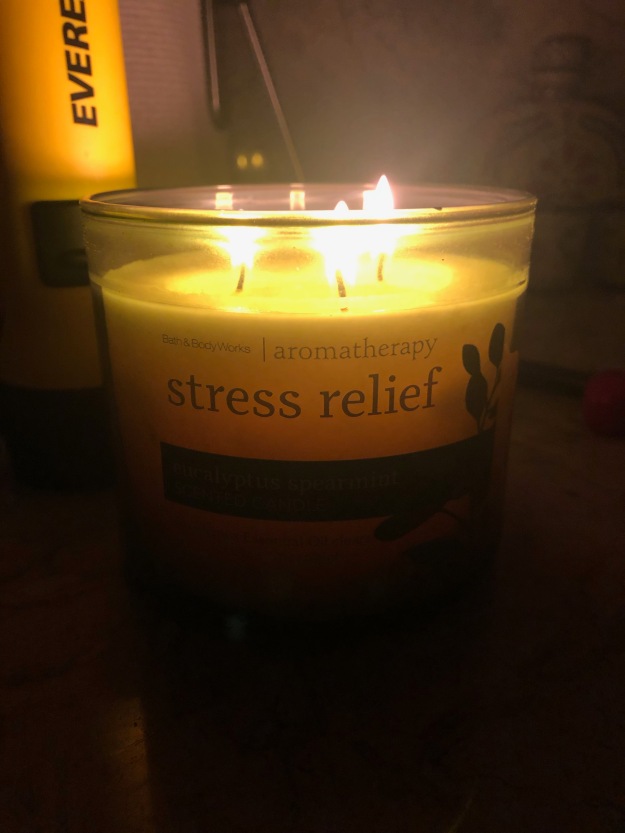 This is a view of a mostly dark and closed Lincoln Center.  They had all manner of shows going on that night.
For a few minutes anyway. 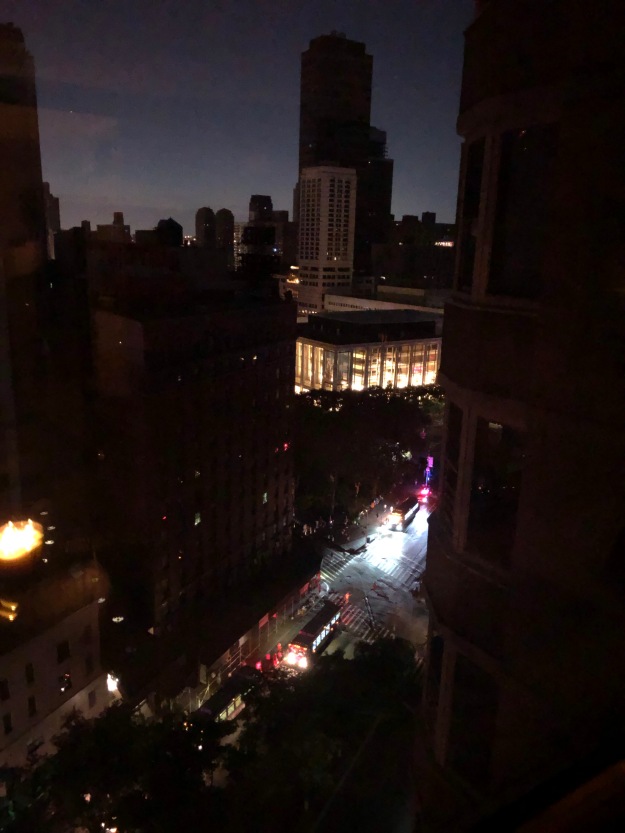 These aren’t anything special, just some dark buildings across the street.
Though I bet the people who live in them would be highly offended by that comment. 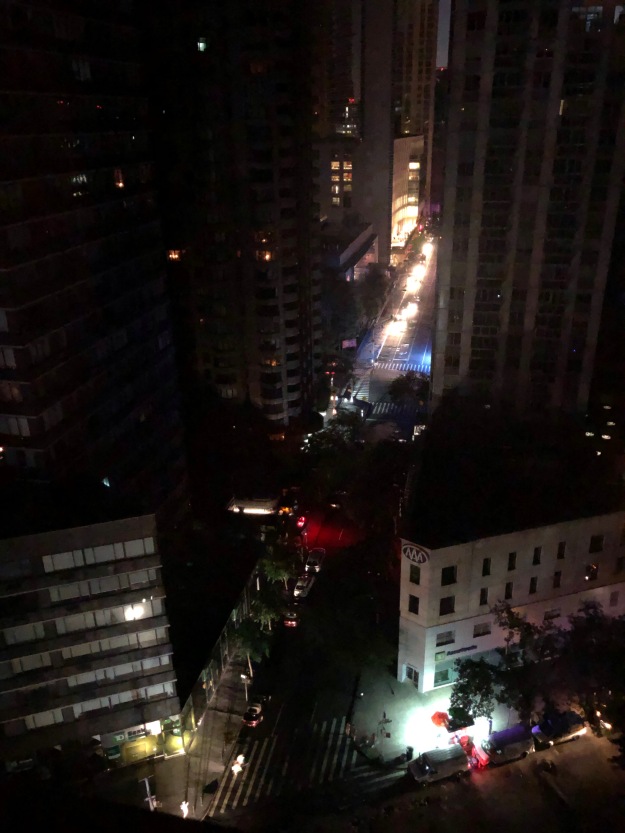 And this …… THIS is the email that I received a few minutes before the power came back on and I did a very, very happy dance.
I’d do it again and film it for you but it wouldn’t be the same.  Tragedy turning to joy cannot be successfully re-created. 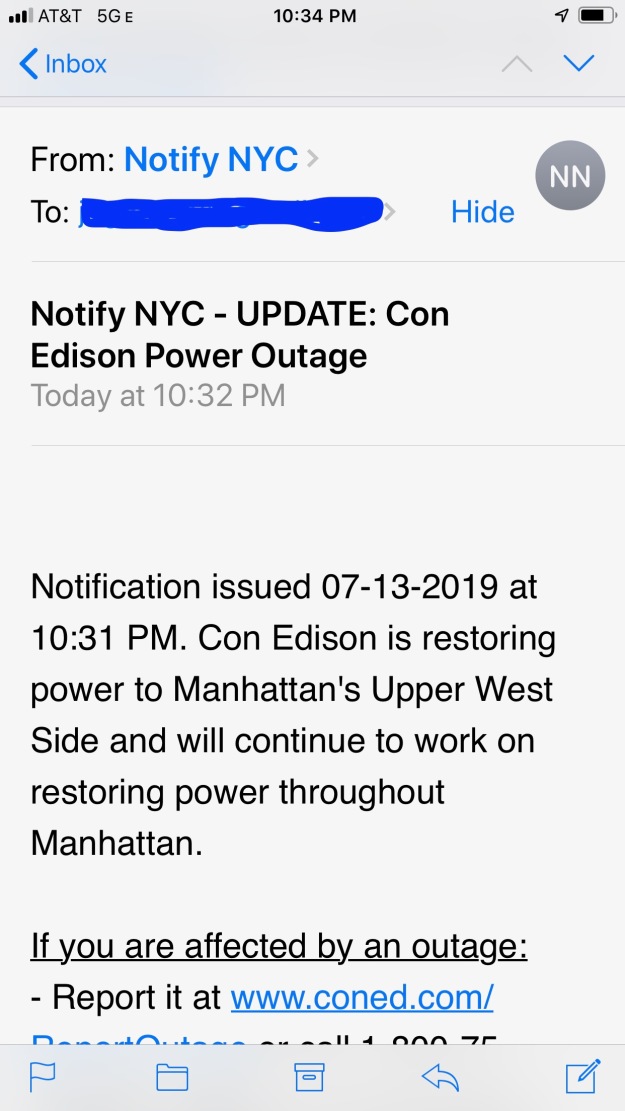 This has nothing at all to do with the blackout.  I went on another walking tour the next afternoon (the irony does not escape me that I was tempting fate to do another tour so soon after barely surviving Armageddon the last time I did a tour) and the tour guide pointed this building out.  This happens to be in my hood.  When it’s finished this will be the tallest residential building IN THE WORLD at 151-ish floors. It will be taller than the Freedom Tower with its radio tower thingee on top.
Let me know if you want to buy an apartment in there.  I’m sure I can hook you up.
And I bet we’ll NEVER have another blackout again so you can feel safe living on floor 151. Ish.

So there you go, the tale of surviving what must have surely been one of THE most dangerous and exciting nights in the history of this city.  If not the world.
I’m just glad that I survived so that I could tell you all about it.