That about sums up most of the last few weeks here in NY and in side trips.

Here, in no particular order, are the shows I’ve seen:

I love Kevin Klein and he did a great job in this. It’s only on a limited run.

This …… this is THE most HILARIOUS play I’ve ever seen! I will most likely see it again. And maybe again. If you’re planning a trip to NY and want to see a play … this can’t be beat. 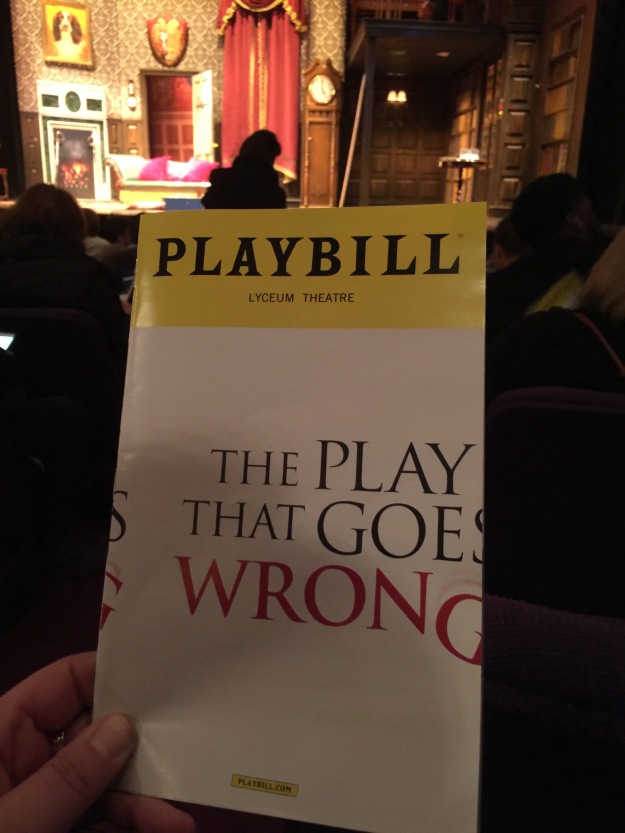 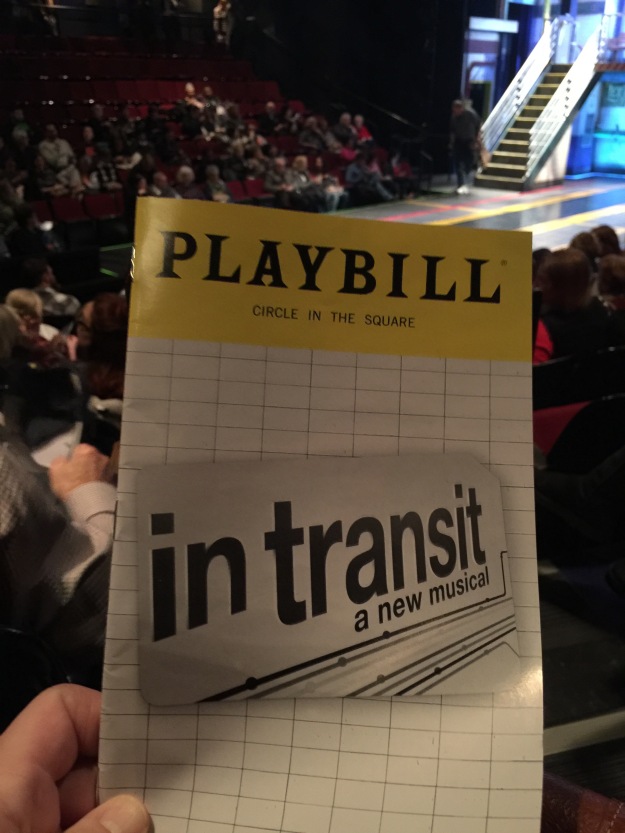 This is a musical that will soon be impossible to buy tickets for. Kind of like Hamilton. I hadn’t planned on seeing it when I came, because it sounded kind of hokey to me. Then I remembered that Hamilton also sounded hokey to me. And so I bought a ticket. And Oh. My. Word. I loved it. It’s great.

This was a fun day with my friend Beth. We were in the audience for Harry. He’s a lot of fun and is so cute. His daughters were in this show. It airs May 8th. Beth and I sat in the very back. Good luck finding us.

This was good. I’m glad I saw it but I wouldn’t see it again (the true test of how much I love a show.) 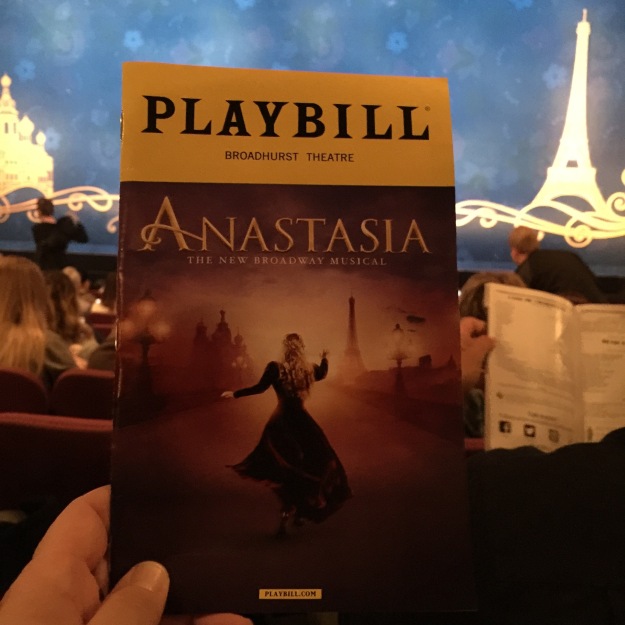 This was, of course, terrific. I mean, it’s Bette Midler. How can you go wrong? She did a terrific job. It’s also a limited run, and difficult to see, but well worth the effort if you can.

And here’s a special note/secret that not a lot of people know.  See that sign down there?  It has Bette Midler’s name above the name of the show, “Hello, Dolly”.  Well, here’s the secret …… if you buy a ticket to a show that has the star’s name above the name of the title, and for whatever reason that star cancels his/her performance for your date, you can get your money back for your ticket.  It’s not a very common billing, but it does happen for big stars.  But again, they have to be billed above the title of the show.
You’re welcome.

I have saved the best for last. This was beyond amazing. Or rather ……. Glenn Close was beyond amazing. She was fabulous times a thousand. She will win the Tony award, word. She originated this role 23 years ago and won the Tony back then. She’ll win it again. Trust me. This is only on for a few months. If you can see it ……. do. Just for her.

And this …… well, this is tied for the best for last. It will be around for awhile, though it will soon be sold out for the foreseeable future. It gave me goosebumps …… and that was just the first act. I loved it. If my children were young again (12 and up) I’d take them to see it, too. It’s not only wonderful beyond words, it’s very, very important.
See it if you can. As soon as you can.

One day I went on a tour of four homes in uptown NY.  They all happen to be smack dab in the middle of the city, though they don’t exactly fit in their locale.  One is a farmhouse, one is Alexander Hamilton’s home that he built uptown because “it’s quiet uptown”.  The other two are mansions.
Here are several pictures: 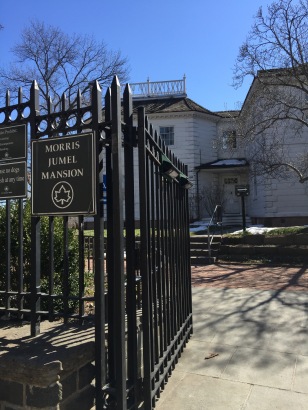 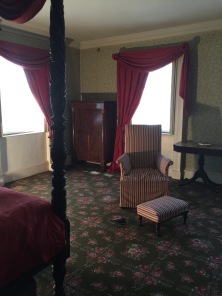 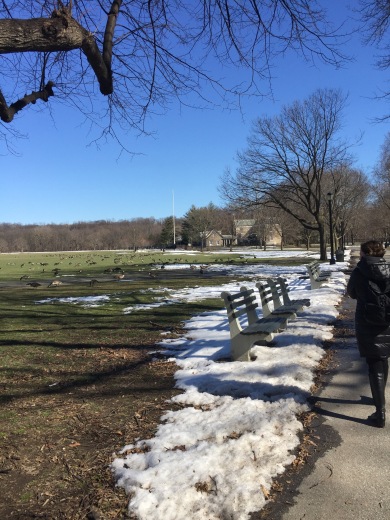 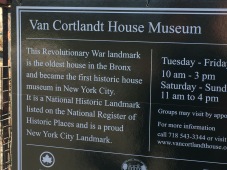 Here are a couple of shots from Times Square and the Colbert theatre.  They’ve changed the sign since he took over from Letterman. 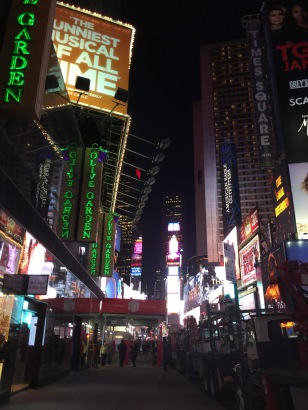 Here’s a strange Trump truck that was going from Times Square to my building and back again, while playing loud music. It was obnoxious, to say the least.
To each his own.

Here’s J-bear, in the hospital after breaking his femur. He spent the night and day in while they ruled out any brittle bone problems and just decided he’s a 2 year old and 2 year olds break bones. His cast goes around his waist/hips and down his leg. Poor J. Poor Daughter #2.
The upside? #1. He only has to have the cast on for 4 weeks. And #2. He got to ride in an ambulance from the first hospital to the second, which he thought was pretty cool.

This is one of the most hilarious sights I’ve seen here. It makes me think of clown cars.
Hmmmm ….

Last week it rained a couple of days in a row. And with the rain came wind, but with a capital W. Wind. Actually, WIND!!! When the wind blows up here it beats that Oklahoma plain wind all to pieces.
And after such rain/wind storms you can find dead umbrellas all over the city. Yep, dead. It’s a sad, sad sight.
Look closely at the last picture and see how many dead umbrellas you can find in it.

And now, last but not least, are some pics from my last Mom’s Day at OSU with Son #3. We had a great weekend. I watched him play Beer Die, climb into a hammock about 6′ off of the ground (no easy feat), ate dinner at a Japanese hibachi place, where he and his fraternity brother took turns tossing and cracking eggs, and played pool at Willie’s, where Garth Brook first sang in Stillwater back in the day. It was a very fun weekend. 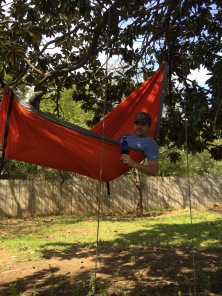 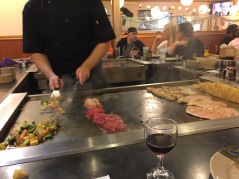 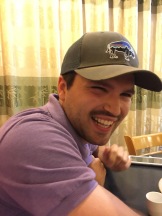 One last story …… Gracie and I flew back to NY yesterday. She was in a kennel under my seat. About 1/2 way into the flight I was engrossed in a movie. So engrossed that I didn’t notice that there was a commotion in the aisle (I was in the window seat). Then a flight attendant got my attention by flailing her arms up and down. I saw her, took out my earbuds and looked at her. She pointed down, in the aisle. And there, much to my surprise, was Gracie. Bouncing around all over the aisle, having a great time greeting fellow passengers.
The most hilarious thing about this was that the guy next to me (on the aisle) was having a minor conniption fit squealing, “Don’t let it touch me! Don’t let it touch me!” I kid you not. I was trying not to guffaw in his face. I wanted to say, “She’s a freaking 4 pound dog. What do you think she’s going to do to you?!”
The flight attendant was reassuring him that she was in no way going to hurt him. I managed to get her to come back to me and then put her back in her kennel. I have no idea how she escaped, but I was pretty proud of her Houdini-ness.
Every time I thought of it the rest of the flight, I laughed out loud. She was hilarious. She had a great time and seemed very proud of herself. I wish that I had paused to take pictures/video, but I didn’t think the flight attendant would think that was appropriate. Even though she found it all pretty humorous, too. Especially with my seat-mate hyperventilating. Weenie.

OK, I think that’s a boat load of entertainment. I hope that you enjoyed it.
I’ll be in NY for a few more days and then head back to Waco on Thursday.
I have mixed feelings about leaving, but I’ll be glad to see J-Bear again. I get to take care of him for the next two weeks since his daycare won’t take him with the cast.
Weenies.

2 thoughts on “Dead Umbrellas, Shows and ……”