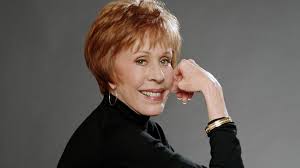 I’m watching the “Carol Burnett 50th Anniversary Special” as I write this.
The memories come flooding back whenever I see this wonderful lady.
She was, and still is, my favorite comic actress.

My mom putting my hair in curlers as I sat on the floor in front of her …… for church the next morning.
Every Saturday night.

One memory stands out the most: the Saturday night when Carol was doing a parody of “Gone With the Wind”.
I had to work that night (at Braum’s for all my Oklahoma friends) and was so depressed that I’d be missing that episode (“Gone With the Wind” was my favorite movie back then.)
Then a miracle happened. At 8:30 (Central time) the manager told me that I could leave early (I wasn’t supposed to get off until 11:00 p.m.). The Carol Burnett Show started at 9:00 p.m.
I was thrilled and raced home in time to watch the entire show.
I’m still grateful to that woman … especially because she had no idea that I wanted to be home, watching that show.

The scene of her walking down the stairs wearing the drapes, with the curtain rod attached, still cracks me up to this day.

There’s another reason that Carol floods my heart with warm memories.
Jim knew how much I loved her.
One year, not long before he died, he found out (before I did …… which was quite a feat) that Carol was coming to Houston to do a memory lane kind of program with clips from the show, questions from the audience and her thoughts and feelings about those years.
He surprised me with tickets.
And it was wonderful.
It was also a bit emotional.
She had a lot of clips that featured people who had died over the years since being on her show.
Bing Crosby
Edie Gormet
Bob Hope
Harvey Korman
Jimmy Stewart
Ken Berry
Sid Ceaser
Art Carney
Ella Fitzgerald
Mickey Rooney
Mel Torme
George Carlin
Kay Medford

I could go on and on listing people who most people don’t remember or have never heard of.
But, as those clips played …… I remember feeling a kind of sadness that my children would never know the world in which those people lived and entertained. And I shed several tears during those clips.
It still makes me feel a bit sad.
I’m more than grateful that I had no idea that Jim would soon be on that list.

I love Carol Burnett.
I admire her for all that she’s done …… in spite of where she came from.
And how difficult her childhood was.

But I love her more because Jim used her to show how much he loved me.
He spent a night enjoying being with me, loving her.
He wouldn’t have been there if it hadn’t been for his love of me.

The mind is a mysterious thing.
As is the heart.
They remember things …… all on their own.
Whether you want them to …… or not.
It just happens.

So tonight I remember my childhood on Saturday nights.
And I remember the man who loved me beyond reason.

And I am thankful.
For so very much.