It’s been quite a couple of weeks.

And today, the 28th, is …… well, today should have been our 31st wedding anniversary.
And of course, just typing that makes me cry.

There are two sure-fire things that bring on tears, even at 6 1/2 years. One is for me to either say or type the words, “I miss him”,
and the other is to say or type how long we would’ve been married.
There are a few other things, too, but I’m choosing to mention only those two.

The last two weeks have been rough …… and great.
I love my new home.
Jim would’ve liked it, too.
And maybe he does.

It hasn’t been easy. Pain has been high throughout the move and it still is. I think that it all can be traced back to whatever inflammatory arthritis I’ve got, and since I haven’t seen anyone about it in over a year, it might be time to give it some attention.
Though in my defense, I quit because nothing. ever. helped.
I decided that no useless medication was better than risking the copious amount of health risks that could occur from taking those meds. A risk worth taking if they helped. But again, they never did.
So maybe it’s time to find another doctor. And hopefully get some relief without feeling loopy.

In other news, I finally finished one room. Finally. Last night I got the study arranged and decorated the way I wanted it. I love it.
Mostly.
I had the wallpaper removed and then had it painted the same color as the study in our previous home. I also had the half bath de-wallpapered and painted. I likED the guy who bid on the job. It was my first time to use him. And last.
After he delayed the job twice, he finally came out with his crew and got to work. I guess that he’d not had much experience in removing wallpaper because it took them twice as long to do the job as he had thought.
They finished up and left and the next day I walked around and took a good look. And was shocked. When they textured the walls in the study they got that stuff all over the windows. And didn’t feel the need to clean up after themselves. Or clean my wood floors, either.
The trim is pretty crummy in many areas and they left all of the outlet covers off (that could be because the walls were dripping wet when they left). But the worst was in the bathroom. Where the guy got the yellow paint for the walls onto the white ceiling. A lot of yellow paint.
And paint all over the fixtures.
It was a very unprofessional job.
So I texted the guy, asking him to come over and look at everything. This was his reply: “Well, to tell you the truth, this job cost me a lot of money. I’ll see if I can fit you in on my calendar.”
Ummmmmm, yes, really.
I’ll never see him again.
Which will be worse for him than it will for me.

When my friend (who recommended him because he’d never been anything but professional as far as she knew) called him up in horror to ask him about this job, he said that he underbid it. He never, ever communicated that to me, and if he had, I would’ve offered him a fair amount to finish the job. I’d never had this done before so I had no idea what amount to expect. When my friend told him that it was a bad job he said, “Well, that’s not my fault.”
Ummmmm, yes again.
It’s MY fault that his crew painted like a bunch of 10 year olds?!! (My apologies to all current and former 10 year olds. You probably would’ve done a better job.)
If he thinks I’m going to give him more money, when he waits until I contact HIM about the mess, to tell me about his money problem, he’s insane.

So, if you don’t look too closely at the study, it’s lovely. Same with the bathroom. Which still needs pictures hung on its walls.
Before (Ugh!): 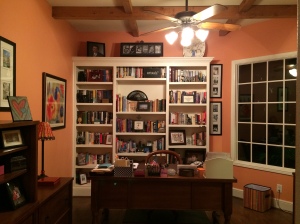 Yesterday, however, I had a lovely surprise when I walked into my bedroom when the painters broke for lunch (a NEW set of painters, hired with a different guy): my room, which had been started at around 9:00 a.m., was totally done and my bathroom was well under way.
In fact, 3 hours later they were finished.
And I’m so happy with their work! 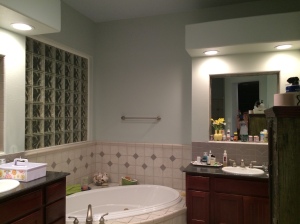 (I know the bathroom looks blue, like the bedroom, but it’s not. It’s actually a very lovely, soft green.)

This morning they come back to paint the family room/kitchen. I can’t wait because it will contain a pop of color that I’m really excited about! I won’t say what it is, but I’ll post pictures afterwards.
Whoop!

So that’s been happening.
It’s also been storming and raining like crazy here for quite a few days. I was considering gathering wood for an ark yesterday since I’m basically held hostage until the workers are done. But I have several lists and that’s on the very bottom.
Two nights ago, during a really bad storm, something happened to one of the electrical outlets outside. “Something” as in there’s a brown mark in and outside one of the outlets like something caught, or almost caught, fire.
And then the phones went out. As did the freezer in the garage, the fountains and the yard lights. Of course, at the time it happened, or some time after, I only knew that the phones were out. I didn’t hear anything or feel or smell anything. It wasn’t until yesterday when a worker came to work outside that I found out that “something” much bigger had happened.
So I’m hoping to have an electrician out today (thank God for Home Warranty companies and closing companies who provide them to buyers!).
Thank God also, that I didn’t have much of anything in that freezer. 🙂

He should be here.
But he’s not. So here I am. In a very much wanted and very much loved new home.
A new home in which to make new memories and cherish the old.

In a little over a week I’ll be back in NY.
And that thrills me, although it also brings a little stress because, hello? Lists!!

I’ll only be there for a couple of weeks and then back here, trying to keep one step ahead of the Feds up there who would love to nab me for taxes if I don’t leave NY enough days of the year.
But, for the very first time, I’m looking forward to coming back …… home.

How blessed am I to have two homes to return to? (yes, I just ended that sentence with a preposition. Get over it.)

And though I’m struggling with pain and trying to not let it get the best of me, though having two homes sometimes means twice the headaches and four times the amount of repairs and money, and though this day is not what it should have been …… I am grateful for who and what I do have, rather than joyless for who I don’t.
Sad, yes.
But joyless, no.

That’s my life.
Finding a balance between the smiles and the tears.

Happy Anniversary, Honey.
I love and miss you every single day.
But I loved the Dance and I’d do it all again.
I love you forever.