…… of color is what I intended for the family room/kitchen area.
I think I got more than a pop.
It’s more like a boom!
But it’s a good boom.
In my opinion.
🙂
You’ll have to make up your own mind: 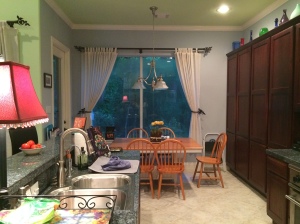 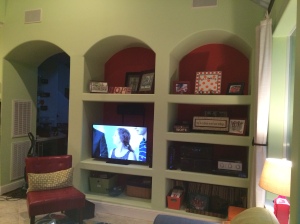 So the family room is now a soft, yet bright, green. The kitchen was supposed to stay the same blue-grey that it was, but the crew painted it green, too. Fortunately I walked into the room while they were still working on the family room. After I got over my surprise, I told them that the kitchen wasn’t supposed to be green. And I told them to paint it over with the blue they were supposed to be using on one part of the ceiling (which they had done). I didn’t have the original color, but thankfully we had enough of the blue they brought. And it didn’t take that much paint anyway.
The island and the back wall of the built ins were painted in a lovely coral color that I absolutely love.
I think the colors look great together. As did the painter. He said that he’s definitely going to recommend the coral to other customers. And he thought the green and the blue flowed into each other well.
So there you go.

After the guys were done painting, it was up to me to move everything back into the family room.
Which might sound impressive.
But you really want to know what’s impressive?
This:

Yes, I did that. Hooked up the receiver and every speaker in the house (there are several) into it.
And it worked!
See? That’s impressive.

Here’s what I found in my garden yesterday (there were more today):

It’s a shame that I don’t care for tomatoes.

The other night Son #3 and I went to see this guy:

We had a great time singing and dancing to all things Jimmy Buffett.

The parents of these two little guys are doing something right!

My washer quit working because the start button got stuck. It’s been pretty much stuck for the last 5 years. Up till now we’ve been able to coax or beat it into working.
But this time it wasn’t falling for any of our usual tricks. It just up and died.
So I Googled what to do …… and did it.
Now my washer looks like this: 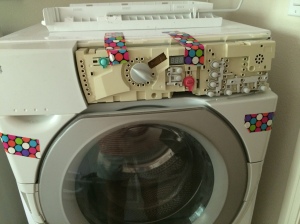 Oh whatever! At least it’s working now. And you have to admit …… the duct tape is a cute touch.
As for that pesky button:

It’s the tiny red dot there.
I taught it a lesson it won’t soon forget. 🙂

I’ll also be getting a new washer and dryer soon.
So I’m not sure who really won.

Today I trimmed several trees that were too close to the house and had branches up against it.
I am woman, hear me roar.
And curse when I try to get out of bed tomorrow morning.