So I went out and took several pictures to show all of you.
You’re welcome.
🙂

I took this picture around mid-morning, after it had been snowing for several hours. We were told that the snow would start around midnight, but would be very light and less than 1 or 2 inches.
Oh to have a job where you get paid, even though you’re wrong most of the time. 🙂

This was a few hours later …… as it was still snowing …… hard.
The snow didn’t start around midnight. It started somewhere around 6:00 a.m. And snowed and snowed …… 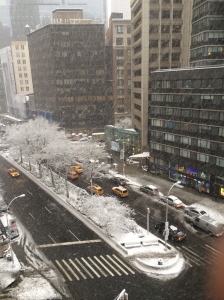 Then I left to go to a private, preview screening of a new movie. It was a rough cut, still not totally finished with the editing and stuff. But it. Was. Amazing!!!
And that’s all I can tell you about that because we had to sign our life away, swearing that we wouldn’t talk to ANYONE about the movie ….. or BLOG about it. If I do then they will come and take my first born child, and I don’t think she’d be too happy about that. I tried to negotiate with them and offer them one of the younger kids, but they were sticklers for their bossy rules.
So …… just be assured that when it does come out, I will be shouting from the roof tops …… or maybe just Face Book …… for everyone to go see it.
After the movie I dropped my purse off at the apartment, got my phone and started walking around taking pics.
These are the results:

Oh, wait. This is a picture of the offending elevator, which was shut off for 2 days. See that little square next to it on the left upper corner? Well, that’s supposed to have a number lit up in it. Which it doesn’t.
I’m guessing that I was not the last person to be trapped in there.

This is a little park area behind my building:

You can tell what these are.  I thought they looked SO cool! 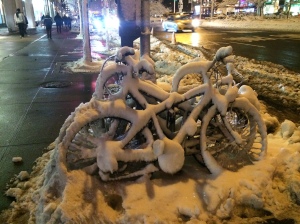 Another group of bikes: 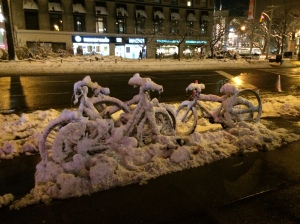 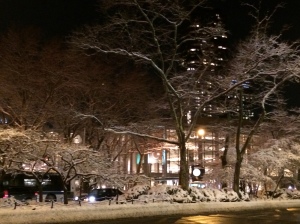 I loved the clock peeking through behind these trees.  You can’t really tell it’s a clock, but it’s that round thing that’s lit up. 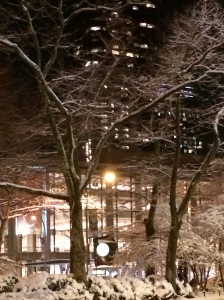 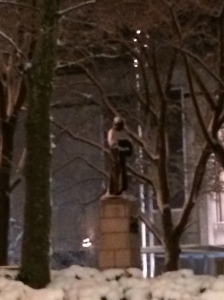 I thought these trees were beautiful …… thus a plethora of pics of them.

The snow covered the north side of the tree trunks. 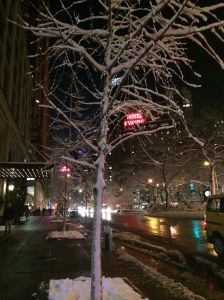 The ends of the branches had tear drop-shaped icicles.  SO pretty.

Ummmm, no idea.  I walked by there today and the bottom half was still covered in snow.  Not that I care.  But I thought it was hilarious.

A quiet side street:

Look!  I made a snow angel!  OK, I cheated and made it with my hands.  I was by myself and it’s too difficult to do a selfie while making a snow angel.  Trust me.

And last, but certainly not least, my coral-colored boots.  They make me happy.  And they seem to make other people happy, too, because I feel friendlier when I’m wearing them.  I made a lot of people smile today.  With me, NOT at me.

OK, that was the winter wonderland.  We’re supposed to get a lot more snow either tonight or tomorrow …… I can’t remember which.

I can’t believe that I’m enjoying the cold so much.  Those of you who know me well, know that a year or so ago I was a self-admitted wimp when it came to the cold.  But I’m loving it now.  And I sleep with one of my windows open all night, which means that it’s about 55 or so in the morning in my room  LOVE IT!

After doing 6 (SIX!) barre classes in a row last week/weekend, I decided to back off and do it every other day (thank you, Daughter #3 and everyone who gave me their opinion of FB).  So I didn’t go yesterday, which made me look forward to i today.  I KNOW!  This was the first time I’ve really looked forward to getting my butt kicked!  And it did, but I felt great afterwards.  Great, as in, I did it!  I still can’t do every single move without taking tiny 2 second breaks once in a while, but I’m getting there.
I can say with 100% certainty that this is THE hardest workout I’ve ever done in my life.  Hands down.  I’ve done yoga, pilates, running (ugh), sports face-paced workouts, etc.  Nothing compares.  And that makes me proud of myself when I’m done.  And panting.  And knocking back water as fast as I can.  And wobbling out the door.

OK, that’s it for now.  I hope you enjoyed the pics.  I enjoyed taking them.  It sounds like you’ll be seeing more in a day or so.
Stay warm!!!