…… a lot like Christmas!
And who would believe, 1-5 years ago, that I would be joyful about that?! Certainly not me. Nor anyone who knew/knows me.
But today I was walking around the city, listening to Christmas music via my cell phone, and seeing the sights …… which included these on every other corner: 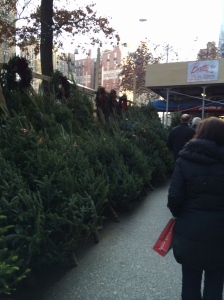 I can’t begin to tell you how awesome, and almost surreal, it felt to be walking, listening, and seeing everything.
So much joy!
🙂

Today I felt that I was channeling my mother-in-law, which should make my sister-in-law, and my own mother, very proud:

I took crochet lessons at a local knitting store
I had a lot of fun, just sitting there, making chain stitches. And listening to the other women who were crocheting and knitting.
That’s my next step …… knitting.
Right now I’m working on a scarf. We shall see how it turns out.
If I can stop dropping stitches.
Dang!

I found a new grocery store on the way home and boy, was I excited!! It was huge and had such a large variety of things. If you’ve never tried to grocery shop here in NYC then you really can’t appreciate how big this was.
There’s a Whole Foods only a couple of blocks from my apartment, but it’s not only hugely crowded …… always, but it’s also hugely expensive …… always.
Daughter #3 likes to shop at Trader Joe’s, which is about a mile from home. It’s not expensive (all Trader Joe’s all over the country sell things at one price, the same price, no matter where the stores are. Which is pretty dang nice of them.), but it is hugely crowded …… ALL of the time. And it doesn’t have much variety. Which is fine, most days.
But variety can be nice. So I loved finding it today, though I managed to control myself …… mostly because I didn’t have my shopping cart with me (those stroller things you see people lugging behind them on the streets in Europe, and here) and it was still about a mile or so from home.
But next time …… the cart will be with me.

When I got back to my apartment, I found this waiting for me: 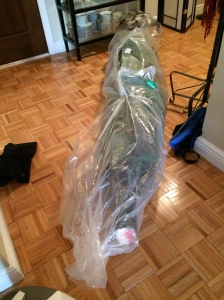 In case you can’t figure out what that is ….. after I stood it up, it looked like this:

Then I unwrapped it, and it looked like this:

I had to put the plastic underneath it because of this: 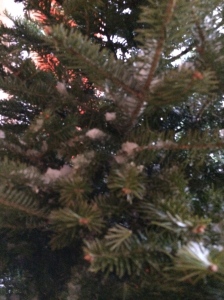 Yep, there was snow/ice all over it.  And it was dripping like crazy.  So I put towels and the plastic underneath it and waited for it to dry.

And then I made some hot chocolate and did this:

Yesterday I had a few loads of laundry to do (because of all of our Thanksgiving guests …. I usually only have to do one load about every other week). There are 2 washers and 2 dryers on our floor, just down the hall a bit from my apartment. But one of the dryers has been on the fritz for a couple of weeks. So I decided to take all of the laundry down to the basement laundry room.
It’s quite a trek.
It involves quite a few empty hallways …..

Finally, after about 4 hallways, you find it: 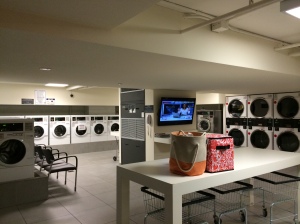 It’s a pretty decent laundry room.  It took me less time to do it all at once, than to do 2 loads on my floor.  So I just read while my laundry was going.
Because it was easier to stay down there and get the three loads done …… but mostly because I have book club tomorrow and I haven’t finished reading the book.
sigh ……

In other NY happenings, last weekend Daughters #2 and #3 and two friends and I went here for brunch: 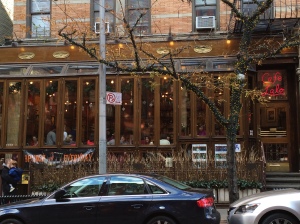 Do you recognize it?
If not, it’s the restaurant where Meg Ryan waited for Tom Hanks in “You’ve Got Mail”, only she didn’t know it was Tom Hanks, who was a complete ass to her. For a while.
He got better.

It’s a very cute place and it was neat to see it, and to sit where Meg sat. We totally touched everything we could, saying, “Tom touched this door knob/whatever!”.
Yes, we were THOSE people.
And we didn’t care.
Plus the food was pretty dang good.

Daughter #3 and I went to our stand up class last night. We only have one more class …… before we actually do our stand up routines in a comedy club.
Oh.
My.
Word.
I try to not think about that very much.
🙂

So tomorrow I go to the book club meeting, even though I most likely will not have finished the book.
And then I’m going to a Tea that’s being given by the Central Park Conservancy.
Thank you, Barbara.
🙂

Then on Thursday I’m going to Radio City Music Hall for a back stage tour of the Rockettes Christmas show. I won’t be staying for the show because my mom will be arriving around that same time.
Then I plan to order in and be in comfy pjs to watch “The Sound of Music” …… even though I’m totally against any kind of re-make of that movie.
Because, REALLY?!!!!! Julie Andrews?????
But the whole “live” thing has me intrigued.
So I’ll watch.

And then have a busy, fun day on Friday.
But I’m not going to tell you about that.
Yet.
I don’t want to spoil the surprise.