…… of my life that I will never, ever get back.

That’s what I think of “Spiderman: Turn Off the Dark”. 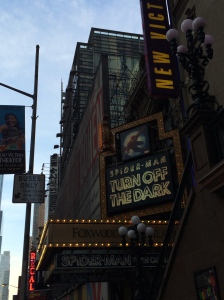 What a great title. Dark pretty much describes it. Dark, as in completely boring story, non-interesting songs, stupid dialogue and the ability to make time seem to last forever. I wanted to leave at intermission. I should have left at intermission.
I even had what one would think would be a terrific seat: second row balcony, on the aisle. Now, that’s not usually the best seat, but in this show you really don’t want to sit in the orchestra. Hell, you don’t really want to sit anywhere IN the theatre, but who knew?

OK, I knew that I wasn’t going to see Tennessee Williams. I’m not an idiot.
But I figured that it would be entertaining, visually.
Not so much.

Spiderman does fly all over the place, as does the Green Gremlin. So if you’re in the orchestra area you’re mostly looking up.
There was a landing only a few feet from me, where they flew up to and landed upon.
Sounds exciting, doesn’t it?
Not in this show. By the time Spidey landed there the first time, it was too late to win me over.

Not only was this show horrible, but so was the 4 or 5 year old boy who sat next to me with his mother. Really?!!!!! I don’t care what cartoon character is in the show! Who takes a toddler to the theatre?!! Who pays that much for a ticket for a child who’s not going to want to sit still for 2 1/2 hours????!
Granted, I paid only 50% of the regular price, but even that is way too much to pay for a child.
It’s too bad it was dark in there …… I think that kid missed quite a few of my “looks that can kill” …… you know, the looks only we mothers can give.
What a waste of a great look.

So anywhooooo, give this show a cold shoulder if you come to NY. It’s leaving soon and heading to Las Vegas, but I don’t think that will make it any easier to watch. Don’t get sucked in.
If you decide to go see it anyway, completely ignoring my advice, I hope you hear my voice in your head for at least 48 hours, repeating, “I told you so!”, over and over.
Because I did.

Other than that, it’s been a quiet couple of days since everyone left. The Son and Daughter made it home safely, always a relief for me.
Son #3 made it back to college today. He worked over the holiday, in an effort to get more spending money for life at college.
Son #2 went to class on Thanksgiving.
Yes, you read that correctly.
ON.
THANKSGIVING.

Not only that, but he’ll be attending class on Christmas Day.
I know.
It seems that the guy who runs this place asked the students if they have any plans for the 25th. Those who didn’t agreed to show up.
W.
T.
H?

I asked Son #2 about this guy’s family …… and whether he had any, to which he replied, “Yes. In Africa.”
So there you go.
Son #3 is really a homebody and doesn’t enjoy traveling all that much, so I think he’s glad for the excuse to stay home.
And Son #3 wants to make more money over the Christmas break.
They should have a grand old time.

In other news, I was accepted as a volunteer for the JumpStart program here in NY. I get to go to a preschool every week and read to the kids. Well, I get to go if I pass the background check. 🙂
I passed the TB skin test, so that’s one step forward.
I’ll either start this week or next.

Daughter #3 and I are almost done with our stand up comedy class. We only have two more weeks before we’re supposed to perform. In an actual comedy club.
Excuse me while I go hurl.

Daughter #3 has already performed twice …… at two open mic nights.
I’m keeping my act under wraps.
Until I’m forced to stand up in front of an audience.
sigh …..

I’m starting a crochet class on Tuesday.
And attending book club and a formal “tea” on Wednesday.
Oh, and my mom is coming in on Thursday!
We’ll have fun.
As usual.