…… has been in full force this past week.

On Tuesday I’m heading to Waco to visit Daughter #2 and Little Man* and the temperature is predicted to be 97 degrees.
Every day.
All week.
Holy crap.

I told D2 that LM, the dogs and I would NOT be spending any time in the park.
Nary a minute.

But in spite of slightly high heat, I’m very excited.
I love being able to stay home with Little Man while she works during the day. I can hardly wait to get there!

To top it off …… he turns one this week so I’m feeling very blessed to be able to be there. And of course D2 is having a birthday party for him.
It’s hard to believe it’s been an entire year already.
A year full of blessings for both of them.
She bought a house, moved, and got a promotion.
They’ve made quite a few trips …… from one end of the country to the other. He’s a pretty well-traveled little man. 🙂

Gracie Lou is doing well. She seems to love having the extra room to run in our Texas home.
She still doesn’t enjoy it when I leave the house without her. In fact, I think it’s pretty sad that she goes and hides in her crate …… every time I take a shower.
Sad that I apparently only take showers when I’m going to leave the house.
Whatever.
Don’t judge me. 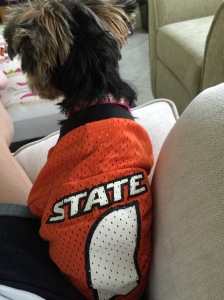 Daughter #3 is doing well in Austin and enjoying her new job. She and her BF drove over yesterday for the day. It was nice to spend some time with them. I’ll get to see them (and her dog, Jake, whom I haven’t seen in almost a year) next weekend for the birthday party. And Son #1 and hopefully Son #2. Whoop!

I also got to spend some time with my Mom and D on Friday. I met them for lunch and a movie (“Everest” — I don’t really recommend it unless you’re in the mood to be depressed). It was nice to be with them, too.

Before I came down this time I had pretty much decided to sell the house this year and live in NY 100% of the time.
And who knows, I may still do that.
But as I sat in the airport and on the plane coming here, I started to re-think that idea. I remembered how very much I love this house.
And I really do.
I wish I could move it to Waco. That would definitely be closer to the other Texas kids, as well as the Oklahoma-for-now kid.
Of course, I’d also have to move the Houston airport because it’s beyond convenient for the NY trips.
But it appears that both the house and the airport are firmly planted, so, for now, I’m keeping the house as “vacation home”.
And yes, it is kind of sad that my vacation home is in Houston.
I knew that’s what you were thinking.

Of course, if you know me well then you know that I’ll probably change my mind next week.
And the week after that.
And so on and so forth.

I’d say it’s a woman’s prerogative/widow-brain thing, but I think it’s gone way beyond that now.
It does keep life interesting though.
🙂

I think that’s it for now. I have to go to bed so that my body will be well-rested for another sweaty day.
Don’t mock me …… sweating profusely takes a lot out of a girl.
And more out of a woman of a certain age.

I know this was a riveting post.
I hope your heart withstood the excitement.

*Daughter #2 prefers the name, “Little Man”, so I’m using that instead of “Little Bit”.
I have to say …… since he’s not so little anymore, Little Man is a better name. 🙂