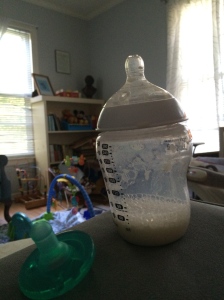 Seriously.
I realize that I was younger back then, but SIX?!
I must’ve been insane.

I’m in Waco this week, taking care of Little Bit at night so that Daughter #2 can get some much-needed sleep. I’m also watching him during the day. For no reason other than helping her out a bit and spending time with him.
He eats every three to four hours. Mostly three.
Throughout the day AND night.

Last night/this morning I got up at 1:30 and 5:30 to feed him.
And then got up at 2:30 and 6:30, because he’s only sleeping about an hour after a bottle. Then he wakes up and cries. I think he may have reflux.
And he’s dealing with constipation …… bless his tiny heart.
So. Much. Fun.

D #2 just got home from work.
I’m still in my pj’s.
Little Bit hasn’t napped longer than 30 or 40 minutes all day.
I managed to get the dishes done (without a dishwasher).
Although it took me two consecutive feedings to finish them.

I did not manage to get a shower.

But, I did manage to get him to smile and coo at me a few times today. He’s just starting that, so it doesn’t happen often yet.
But we’re working on it.

In other news, I have another new Little Bit, only she’s really Littlest Bit: 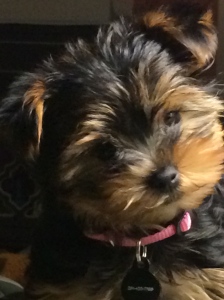 This is Gracie.
Gracie Lou Freebush.
I KNOW!!!!!
Isn’t she THE cutest thing ever?!!

I got her a couple of weeks ago when I was in Oklahoma.
She’s been my secret project.
I’ve been looking for a Teacup Yorkie breeder for a while, and did a search in the area of Okla that I was going to be in and Voila! I just happened to find one who had just posted Gracie (she named her Peyton — I changed it) the day before I searched.
So I picked her up that weekend and then we flew back to Texas.
And then to NY.
And then to Waco!
She’s only 8 weeks old and she’s already well-traveled.
🙂

She actually got me a little prepared for this week, since I get up with her twice during the night to let her relieve herself.
In a litter box.

Yep, I’m litter training her, which I discovered is a common thing, especially with small dogs and ESPECIALLY in New York (or any big city with high rise apartment buildings).
While I was researching the breed and how best to train them, I happened upon some articles about puppy litter boxes. It didn’t take more than a nano second to decide that was the way to go.
So far she’s doing pretty well. She’s not totally trained yet, but I’d say she uses the box about 80% of the time. Not too shabby for a baby.
🙂

She is as adorable as she looks, except for when she’s chewing on your fingers …… or toes.
She’s teething like a madman (do madmen teethe?) so she’s constantly looking for something to chew on.
We’re working on that.
And keeping all shoes some place high.
Well, “high” as in maybe 12 inches from the ground.

She weighs two pounds right now and will get to be around 5 when she’s fully grown.
A beast, I know.

She squeaks a lot, kind of like a guinea pig, which she may be more related to than any dog.
She just found out that she has a bark a few days ago.
She seemed very surprised at the time.
And then she thought she was all that and a bag of chips.
A bag of chips that could bark.

So we are over-flowing with cuteness around here.
Which makes the sleep deprivation easier to deal with.

I’m also dealing with either a badly strained/torn oblique muscle, or I’m slowly losing a kidney or appendix. The pain is intense and has been since last Wednesday. I must’ve done something during a barre class, but nothing hurt at the time. The pain came the next day, after I did some stretches. Nothing big, and again, I didn’t feel any pain at the time.
But I’ve felt it big time 24/7 since then.
Just another thing to add to the fun.
🙂

Speaking of that, it’s baby-crying time, so I’d better go assist.
Her baby …… not mine.
🙂