…… because I walked all over the town of Hoboken today.
Seriously.

I left the apartment at 9:00 to head to the southern most point of Manhattan. As in Wall Street/the Financial District/the World Trade Center.
I didn’t get home until 7:00 p.m.
Oh, my word …… my body hates me right now.
But it was worth it.
🙂

So, I made my way to the ferry terminal down there, and met up with several friends from the Manhattan Women’s Club.
I know what you’re thinking. “A women’s club?! Sounds very snobby to me!”.
I get it.
I thought that the first time I heard about it.
But trust me, this is a group of some of the friendliest women I’ve ever met. Most of them have lived all over the world, so they’re used to making new friends and accepting people easily.
And there are so many events/lunches/book club meetings that it’s hard to keep up with them all.
I love it.

Today we went on a tour of Hoboken.
The weather was perfect for a tour of any place, but Hoboken was pretty dang cool. It’s changed a lot since the days of “On the Waterfront” and Frank Sinatra.
Like night and day.
It’s now a hugely popular city and housing is expensive and scarce.
It’s a lovely city and I can see why anyone would want to live there. I mean, heck, it’s got the best dang view of the NYC skyline.

I took a ton of pictures.
And hopefully I’ll share them with you …… one day.
But tonight is not that day.
I’m pooped.
I’m beyond pooped.
And I have to leave the apartment tomorrow morning at 8:00 a.m. to head for the airport ….. and then take two flights to Toronto.
Camp Widow goes international this weekend.
I know!!!

So instead, I’ll give you a list of things I observed yesterday while walking around Manhattan/sitting in Columbus Circle for an hour.
It probably won’t be as interesting as Hoboken, but there you go.
Beggars can’t be choosers.
I have no idea why I wrote that.

OK, here are my observations from yesterday:

2. As I sat in Columbus Circle I noticed a young woman sitting near me. She was listening to music (like 98.9% of the people who walk around Manhattan). And she was waiting for someone, though I didn’t know it until she got up and ran to a much older man who was walking towards us. They grabbed each other and hugged. And hugged. And hugged. And hugged.
It was an abnormally long hug, which made it all the better.
They were evidently thrilled to see each other, and she, especially, could not let go of him.
It was a pretty neat sight.
And then I noticed what he was wearing.
Which may or may not have made it more cool.
He had on green velvet pants …… bright green.
He also had two different pairs of boots on his feet. Not that he had both pairs on, but he had one boot on his right foot, and a whole ‘nother boot on his left.
He was a bit …… eclectic.
I would’ve loved to know what their relationship was and what he did for a living.

3. There’s been a huge crackdown on cyclists in Central Park over the weekend. That’s because a woman was killed when a cyclist hit her. So I watched policemen make cyclists get off of their bikes when they came into Columbus Circle, heading towards the Park. Which was nice because a lot of times those guys ride all over the sidewalks, where there’s supposed to be NO bike riding.

4. The temps were in the high 60’s/low 70’s yesterday. Which made some people dress in shorts …… and others in jackets and scarves.
Really?!

5. I am now in a ton of photos that were taken in Columbus Circle yesterday afternoon. Without even photo bombing a single person.

6. People watching outdoors in New York is WAY better than people watching elsewhere. With the exception of Schlitterbahn in New Braunfels, Texas …… where it appears that most people don’t own a mirror.

7.Sometimes, if you sit long enough, you get free samples. 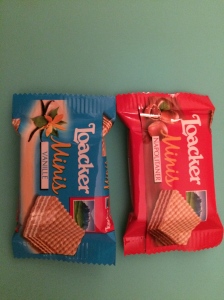 8. Columbus Circle at 3:00 p.m. is a pretty decent place to sit and people watch on a gorgeous fall afternoon. 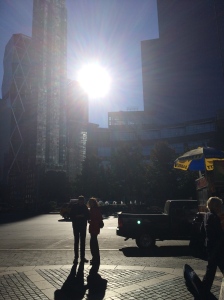 9. Some girls’ school uniform skirts are WAY too short.

And, for the 10th thing I observed in Columbus Circle ……

10. I am thanking God that my three sons have better taste than this guy:

See you from Canada, Peeps.
🙂