We had a very nice Easter weekend up here in NY.
Yesterday the weather was warm (in the high 50’s!) here and oh, so beautiful.
After I went to barre class I went to see a play (which was horrible) and then spent time walking through the Park. It was a very popular spot this weekend. 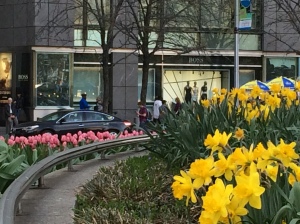 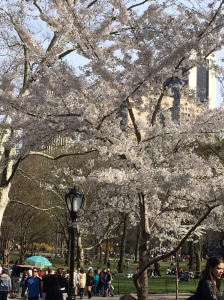 This little guy and his mom were having pictures done underneath the beautiful trees with all of the white blossoms.  You can’t really tell, but he was dressed as a bunny, with ears and a tail.  Too cute.

I’m not sure what was going on, but suddenly there was a herd (not sure what to call a group of them?) of policeman on motorcycles in the Park.

As I was leaving the Park I saw this woman.  And instantly started humming, “Tuppence, tuppence….” (hopefully you recognize what depressing song was going through my head).  Because she was totally feeding the birds.  Lots and lots of bird seed was in that bag.
For pigeons.  Also known as rats with wings.
Or Jim.  🙂

I went up to the top of my building last night to hang out with some friends. And I took these pics of the park, which is now getting green. 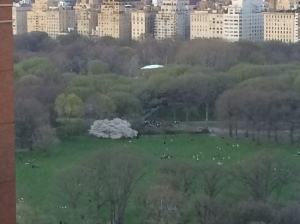 We have a fantastic view from up there.

Then I came back to the apartment to hang out and relax. Oliver was obviously intent on doing the same thing.
He was snuggled up against me, sitting up like a human, with his legs stretched out. He was very, very relaxed.  I took these picture from above: 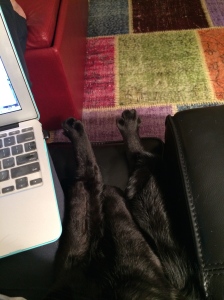 He finally decided to stretch out …… with his front feet curled in front of him:

He leads a very tough life.

This morning we got up and started getting ready to have friends come over for an Easter pot luck lunch. I also watched Ed Young’s Easter service from Houston, which made me feel more connected to Texas. 🙂
Daughter #3 had invited several of her friends from church (including her BF!). They all brought yummy dishes (the most popular was the box of Texas kolaches — which means NOT fruit filled, but sausage and cheese and jalapeño-filled!). Those disappeared very quickly.

We played a lively round of Apples to Apples and then it was time for several of us to go to church.
Yes, our church services are on Sunday nights (it’s a church plant from Texas).
Daughter #3 and I were supposed to go out with the guys that I met Friday night at the supper club. We had reservations for 8:00, but one of the guys has been sick all day so we had to cancel. We were disappointed but hopefully I’ll be able to meet up with them while I’m in Houston next month.

So that was my weekend. Nothing exciting, but very nice anyway. The temps were cooler today, but it still appears that maybe we have finally reached spring time up here. 🙂

A word of advice for any theatre-loving peeps: if you ever think about going to see the play, “Under My Skin” …… don’t.
Keep your money.
You’re welcome.

I hope you all had a peaceful and blessed Easter.
🙂