…… and I’m not dreading one moment of it.

Well, except the fact that my two Texans won’t be joining us, but they chose to stay south. I wish they were here, but I understand their choice.

This week I’ve been creating lists of all of the things in the house I need to either move to NY, give to the kids, sell, store, donate or trash. There’s a lot of stuff. A whole lotta stuff. I don’t intend to bring much at all up here, aside from some personal affects. I don’t plan on keeping any furniture at all, which leaves 2 king bedroom suits, 1 queen bedroom suit, 1 full bed, and 3 twin beds plus dressers. I have an almost full sized pool table/air hockey game and a beautiful baby grand player piano that I haven’t decided what to do with.

I also have a really cool Nordic Trak Home Gym, that’s pretty amazing. But I have no room in NY for it. Or for many things.
I may even decide to sell my 2000 red Mustang convertible that Jim bought me for my 40th b-day.

I have a kitchen table, dining table plus buffet, 2 sofas, serval charis and ottomans, recliners, love seats, king dual temperpedic mattresses (oh how I love those), plus tons and tons of kitchen stuff, 2 fridges, 1 freezer and a front loading washer and dryer.

Add to that the 50 ” tv and surround sound system, plus 4 other flat screens and it would be MUCH easier to just sell the house furnished.
Totally.
Do you know anyone that wants a huge house at a great price that’s fully furnished?
Now that would be a miracle.
🙂

Back to NY …… Son #1 and Daughter #2 made it here last night. Daughter #2’s suitcase didn’t make it with her flight, but it did follow closely behind, so she just stayed at the airport to see if it made it. Thankfully it did.
Yesterday it was in the 60’s here.
I could be in Houston for that warmth.
Ugh.

Today we hung out around the apartment, except for Daughter #1, who went to work and D #3, who went to babysit today. For $15/hour. I think I may take up babysitting because …… REALLY?!!!!

I went to Harlem to read to my class today. One little girl was so glad to see me that she gave me a hug as soon as I walked in. Who can’t love that?
🙂

After I came home Son #1 and I headed off to a private screening of “August: Osage County”. I have no idea how I got these tickets. I just opened my email yesterday and there was an offer for 2 tickets. For free. I checked “Yes” and printed them off and we went to the theatre tonight. Got great seats, settled in, and started people watching. Which was good for us because Bernadette Peters sat in front of us. The guy with her looked like Joel Grey, but I couldn’t get a close enough look to make sure. She, however, I had no doubt was BP. And let me just say this about her (and Son #1 agrees) …… she looks FABULOUS!!!! At first, I wasn’t sure that it was her because she’s older than I am and I thought she should look it. Alas, she does not. Plus, she doesn’t look tightly operated upon, either. And she seemed very kind when she SPOKE TO ME after the movie!!!
Indeed. 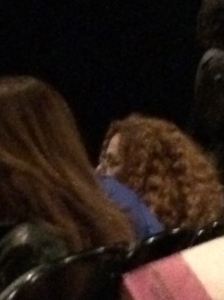 Down from her a bit was that woman who used (?) to be on the NY Housewives reality show. She was the “countess”, but I never cared for her. She was with a girl friend.
The auditorium was kept rather dark so it was difficult to see if any other celebrities were there, but I have to believe that there were. I have to answer a survey now that I’ve seen the movie. The director was there and he introduced the movie.
It was very, very good. It was very, very funny in places and very, very difficult to watch in others. It’s not a comedy.
It’s dark. But it’s about a dysfunctional family, which we all have, only this one has more DYS than many.
And it takes place in Osage County, where I used to live at one point, so I could relate …… a bit.

So now you’re all caught up with me. Mostly, I think. The rest of the week is just time to hang with the kids, and Skype with the Texans Christmas morning. I miss them.
But I’ll see see them in a little over a week. Then off to Tulsa for V’s daughter’s wedding, and then off to California for the Soaring Spirits board retreat with some of my most favorite people in the world!

I think that all just made me tired.
Now if I could sleep during regular hours, that would be great.

1 thought on “The Holiday Approaches ……”