…… left here in NY before I head back to Texas for almost two months.
(Did you catch the “Les Mis” salute? Five points for Gryffindor, or your favorite house, other than Slytherin, if you did.)

It was on the market less than two days when the offer was made. Thank You, God.
It’s true that I’m mostly relieved to have this house off of my shoulders, as well as a little sad, of course.
Jim loved that house and that property.
We spent the last weekend of his life there.
We spread some of his ashes there.
Thank goodness I know that all of that doesn’t mean that he’s there.
Because he’s not.
He’s in our hearts, where he’ll always be.
No matter where I live, who I marry (ROFL!!!) …… or don’t marry, or where his ashes are. (Truthfully, the days we spread his ashes were pretty windy so they didn’t all end up where we intended! 🙂 You can read the hilariousness of it here if you’d like.)

Anyway, it’s almost done. Actually, the worst part is yet to come …… the going through/disposing of all of the things.
Ugh.
Maybe I’ll just strike a match. 🙂

I forgot to add a few things to my last post.
Like the fact that I played tennis on Monday (and will each Monday that I’m here through spring. Then we’ll have to find another club.) 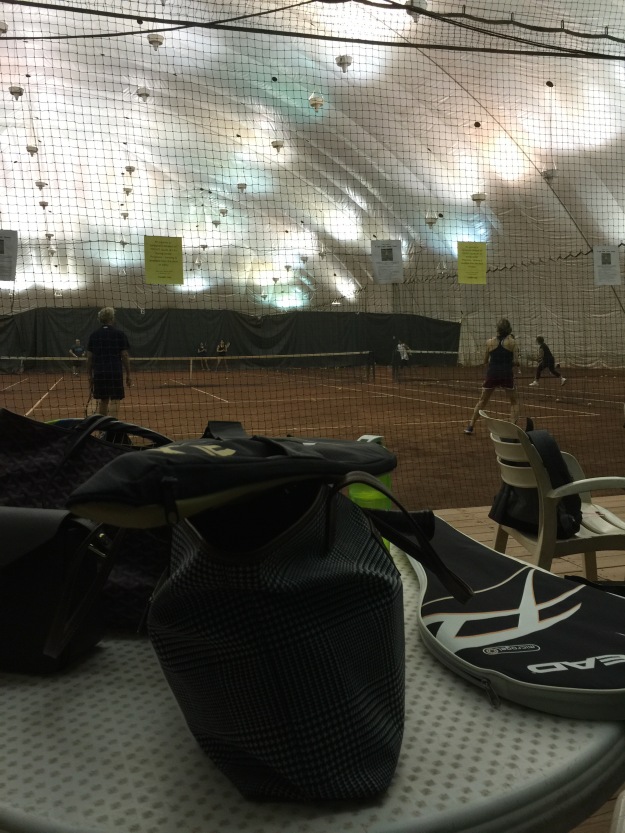 As you can probably tell, the courts are clay, which is a very interesting dynamic. And very different from the hard court surface on which I’m used to playing. The ball plays slower and bounces in all kinds of weird ways.
But it’s still SO MUCH FUN.
Especially the best part …… we’re ONLY playing for fun.

Then Monday night Jeni and I went here for dinner. 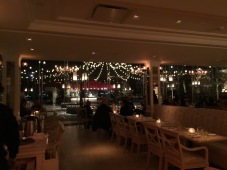 Yesterday Gracie and I lazed around the apartment most of the day. I did get some laundry and cleaning done.
And I played around with a selfie remote.

Then I went to the club upstairs in my building to hang out with friends and watch the debate …… which was interrupted by a very lovely fireworks show outside our windows, in celebration of the Chinese New Year. 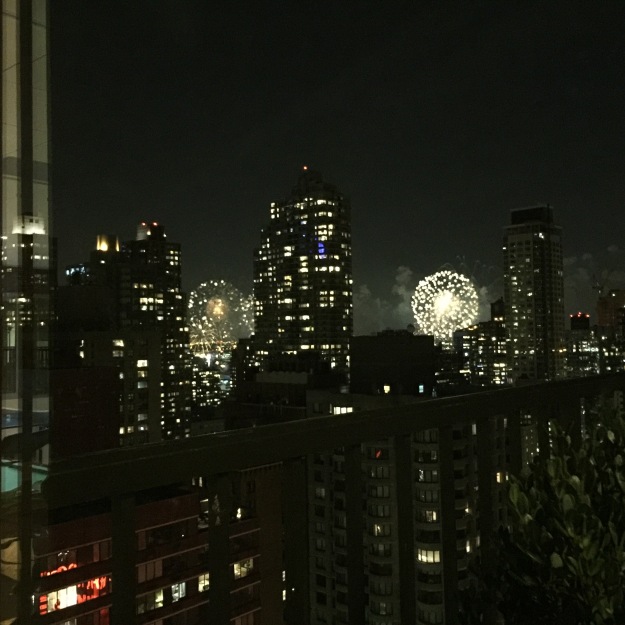 Today Gracie and I had our last Therapy Dog class. It was a make up class that we were supposed to do last week, but no one notified me to let me know that the classes were now running a week behind because they cancelled the first week’s due to the snow storm.
At least last Sunday was a beautiful day for a long walk. 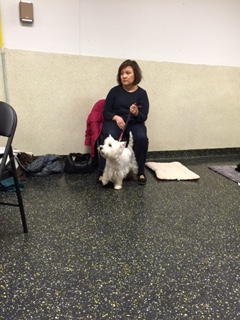 This woman and her dog reminded me very much of a friend and her dog. And hopefully you know who you are, N!

Afterwards we had a nice walk in the Park, looking for snow in which to make a snow angel.  Alas, we only found this, which was a non starter.

But we enjoyed the walk and the cool 40+ degrees weather.

And now I am ensconced in the upstairs club, reading, writing a blog post, chatting with friends, while we wait for the Super Bowl to start.  I could really care less about the actual game (although I am wearing navy leggings with a bright orange sweater because if one is going to watch, one really should pick a team/player like maybe Peyton), but I do look forward to the commercials and maybe the half time show.

To those of you who do care ……