I was checking out the neighborhood around my church yesterday since I had some time to kill before the service started.
Imagine my surprise when, as I was walking around a NYC block, I came upon this:

I know, right?!!
Who would’ve thought there’d be a waterfall smack dab in the middle of the city?!

That’s not the only thing I discovered.
It seems that the church is not only behind a park with a waterfall, but in a neighborhood of embassies.
These two are across the street: 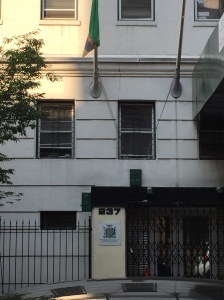 They might not be as cool as a waterfall, but I think they’re pretty interesting.

After church I went up to the roof of my building.
As usual, the view was beautiful. 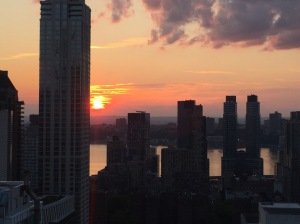 That’s pretty much all I have for you today.
Other than the fact that it’s blazing hot here …… which I know makes my Texas friends roll their eyes.
But I’ve been surprised (though I’m not sure why …… it’s not as if this is my first summer here) by the intensity of the heat.
The temperature reads in the low 90’s, which made me think, “Yay!”. But in reality, temperatures in the low 90’s in a cement jungle, with as much humidity as Houston, makes for a pretty miserable outdoor experience.

Thankfully, if you live in NY you really never have to leave your building.
Truly. If you’re an agoraphobic, this is THE best place to live. Everything you could ever need can be delivered to your apartment.
Many times in less than an hour.
Even Amazon.
Though I may have to re-evaluate using that site, based on today’s news.
Innocent until proven guilty.
Except in the eyes of the press.

Anyway, I still went out today.
Though not very far.
I went to a movie with a few friends from my building.
The movie was in an Indie movie theatre that’s below our building.
So yeah, it’s pretty convenient.

We saw a foreign film entitled, “Phoenix”.
It was a very good movie.

Oh, and I also saw the new Meryl Streep movie, “Ricki and the Flash” last week.
While I didn’t think it’s one of her best, I still enjoyed it.
I mean …… it’s Meryl Streep.
What’s not to love?
And I happen to enjoy Kevin Klein quite a bit, too.
And then there’s Rick Springfield.
That’s all I need to say about that.

So there you go.
An update from THE city.
And a less emotional day.
Yay for that.

And yay that Tracy Morgan is going to host SNL sometime in October.
He’s come a long way on a very hard road.
And I’m looking forward to seeing him and hearing his humor again.

The End.
For now.

2 thoughts on “A Surprise Around Every Corner ……”