(Settle in for a bedtime story, Peeps.  🙂

They can be human, or non-human. They can be furry, or have scales.
They can be carnivorous, or vegan.
They can get up with the sun, or be nocturnal.

But they all seem to have one thing in common:
They want to see if they can make my head explode.

I went back to the house yesterday, armed with a bucket full of cleaning supplies …… and an intent to maim and/or destroy.
I was able to do neither.
Which I guess is a good thing, because that meant that the most recent party animal couldn’t make his way back down my chimney, through my flue ……. and into my house.

We first thought that he had only been in the house one time, evidently on Wednesday night/Thursday morning. That’s because a family had looked at the house and, when questioned, had seen nothing amiss. But then today we found out that they had indeed seen something amiss …… they just didn’t recognize it as that. It turns out that when they saw clumps of poop in the bedroom, and tons of dirty footprints in the bathtub …… they figured that the owners had a dog and had given it a bath. And I guess they thought the owners didn’t have a problem with poopy floors.
Go figure.

As I cleaned the house up, I was able to piece a bit more of the story together.
The raccoon made his way down my chimney, out of the fireplace and through the screens and glass doors some time during the middle of the night, most likely.
He is SO lucky that I don’t live in that house, or that I didn’t live in it the night he decided to drop in for a visit.
Or a party.
I can assure you that there’d be one less raccoon in the world today.
Probably because he would’ve had a fatal heart attack the moment I saw him and started screaming.

He didn’t wander around downstairs. I don’t know why, maybe he thought he wouldn’t run into humans if he headed upward.
Maybe he thinks all parties are held on upper floors.
Or maybe there was already a crowd of raccoons doing the limbo up there.

Whatever the reason, he took his fat, dirty self up the stairs and into Son #1’s room. He walked around the room, looked out the window, and then decided to poop. And so he did.
Then he walked through the bathroom that connects that bedroom to Son #3’s bedroom. He opened a few drawers on his way, but didn’t find anything.
Once he got into Son #3’s room, he opened more drawers in the wall of built ins. Again, he found nothing. So he walked along some of the shelves, continued to find nothing, so he got down and headed towards the window. He then decided climb up the blinds to see if he could look out the window, and wave to his friends letting them know the coast was clear.
Imagine his surprise when the blinds came crashing down to the floor, along with his fat, furry, dirty body.
He was so surprised that he peed all over the blinds.
And then peed in another area for good measure.

After that he decided that he could use a drink, so he headed into the bathroom. He couldn’t turn the faucets on so he headed into the adjoining room with the toilet and tub.
He then climbed up on the toilet (he could do that easily because we raised our boys to always put the lid down!) and took his dirty paws, grabbed a hold of the lid to the tank, and tried to lift it off of the tank.
He managed to get it a bit askew, but he wasn’t able to lift it completely off. The wimp.

He gave up, climbed down, and walked over to the tub. That’s when he noticed that the faucet was slowly dripping, so he managed to climb up, and over the tub wall. Then he fell into the tub because the porcelain was pretty slippery and I doubt that he’d had much experience with porcelain.
After getting up, he focused his attention on the faucet, and started licking up the drips on tub floor, as well as on the faucet.
It’s hard to tell how long he did that before he either ……
A. Tried to get out of the tub, but kept sliding back down into it, leaving hundreds of sooty-footmarks all over the tub …… or ……
B. Texted all of his raccoon friends, inviting them to come over for a hot tub party, which accounts for the hundreds of sooty-footprints all over the tub.

Choose your own conclusion.

At some point he was finally able to make his way out of that slippery tub. He then walked through one of the bedrooms some more, and then left the bedroom and climbed the few stairs that lead to the upper level of the house, which contains 2 more bedrooms, connected by another bathroom.

He walked into the largest of the two room, moved the blinds so that he could look outside (to make sure that all of his friends actually left the house) and then opened a few desk drawers so that he could use them as a ladder to get up onto the desk.
He once again found that there was nothing to play with, nor was there any food to eat.
So he waddled into the bathroom and spied the toilet paper roll. At last! He found some fun …… and proceeded to unroll the entire toilet paper roll, leaving it lying almost neatly in a pile on the floor.
When it was completely off of the cardboard roll he decided to move to the next room. But this time he didn’t try to get into the tub. I think he’d had enough of slippery porcelain, and his fur was still drying so he stayed out.
He wandered around Son #2’s bedroom, but decided that he didn’t need to pee or poop. He pulled out a few desk drawers, climbed up and checked out the shelves. By this time he was becoming pretty bored and most likely pretty tired from all of the hot-tubbing/drawer-climbing/toilet paper un-rolling/pooping and peeing.
He knew that it was close to his bed time because the sky was getting lighter and his eyes were getting heavier.

So he waddled his fat, damp-furried, but cleaner-footed self back down the stairs, went into the dining room, opened a few drawers, climbed up on the cabinet, found nothing and so decided it was time to head out.
He waddled back over to the fireplace, got up on his two back feet, looked around to make sure no one was watching, and then lifted himself up and into my chimney. Once he got past the flue he was able to grab onto a brick ledge that goes around the inside of the chimney. From that ledge he could stand on his toes and grab on to another, though smaller, brick ledge. There are several small 2-brick ledges that circle (or square?) the inside of that chimney, making climbing up or down a challenge, but definitely do-able.
Trust me, this isn’t my first rodeo.
And we’ve had that stupid chimney top fixed several times with all kind of materials locked down over it.
But nothing works for very long.
Thus, the hot tub party in the middle of the night.

So there you go. A raccoon bedtime story.
You’re very welcome.

This is one of the pics of the tub, post its first scrubbing.  There may, or may not, have been some sailor-like language accompanying all that exhausting, but not very effective, scrubbing. 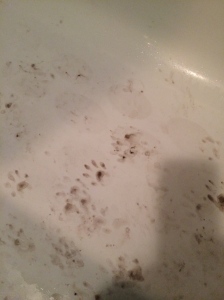 This is Son #1’s room. Well, it used to be his room. Now he has his very own apartment and no one lives in this room, or this house at the moment. But I’ll still refer to it as his room. For now. 🙂
It looks pretty clean, doesn’t it? Look a bit closer. 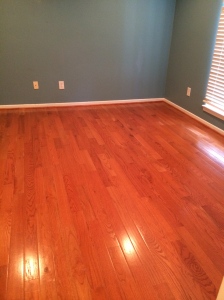 See that? That’s what we call a raccoon foot print. That’s probably what most people call it, but if you have a different name for it, please share. 🙂

There’s another one. It’s pretty large. Have you ever read “The Kissing Hand”? If you have, check out the middle of the “palm” area.
I know, right?!!!

This is a video of me, following the fat guy’s foot steps. I was investigating. Kind of.
I don’t think I’ll be working for the FBI any time soon.