I received a package in the mail today.
From him.
Kind of.
But not really.

It contained a note.
From him.
Kind of.
But not really.
But this is as close as I’ll ever get to him, so I’m keeping it.
And sharing it ….

He said I’m amazing.
I may just swoon.
🙂

I also received this:

A t-shirt. The pictures on it are characters that he’s played (like Batman).

If I sleep in it …… it will almost be like …… never mind.
I won’t take you there.
Even though I already did.
🙂

Daughter #3 is on her spring break this week.
Today we went to see “Draft Day”.
It was MUCH better than the last movie I saw with Kevin Costner.
Thankfully.
I enjoyed it. And found it very interesting.

Afterwards I took a walk in the Park.
It was a lovely day.
And it was warm. 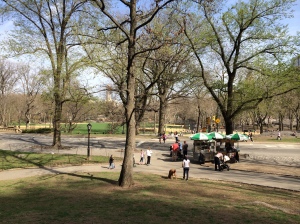 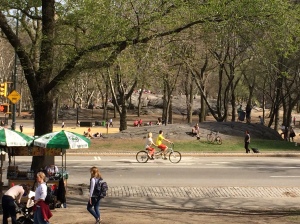 It’s supposedly going to be much cooler tomorrow and the rest of the week, with the lows in the 30’s.
But the highs will be in the 50’s and up here, that’s not all that cold.
I, for one, will miss the colder temps. But not the ice.
No, definitely not the ice.

Tonight I went to my first Barre class in 11 days.
Eleven days and a long case of bronchitis.
And it was as hard as I feared it would be.
But I survived.
It wasn’t pretty, but then even on my best days it’s not pretty.

But I’m back in NY and loving being back.
I don’t have very busy week lined up so I may have to change that up.
I’m spending this evening watching “Gone With the Wind”.
I’m on hour 3 out of 4.
Fiddle dee dee.

Rhett is now proposing to Scarlett.
So I must end this and watch her flake out at night while on their honeymoon.
Yes, I’ve seen it before.
About 10 times.
Which is like 8 times too many.
Hi, Mom.
🙂