I’m hoping that this post won’t be a short novel. Or even a short story.
But I can’t make any promises.
I’m trying to catch you up.
Because I care.
And because you expect great things from me.
Or at least fun things.

So, here are some more pics from Tampa. These are from Sunday, post Camp Widow, as we took the trolley through town and then walked around a bit.
Here’s what you need to know about this part of Tampa:
Starbucks on every corner?
Nope.
Tattoo shops on every corner?
You bet.  (I apologize for not realizing that my camera was set in some strange color setting.  For a while I thought it was just my eye sight.  See?  It’s not all fun and games being me.) 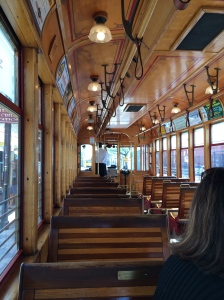 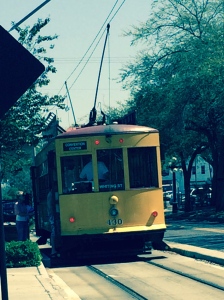 I just thought this was humorous.  I mean, I’ve never pictured the U.S. Customs and Border Protection office as having “customers”.  Detainees?  Yes.  Customers?  Not so much.
A rose by any other name …… 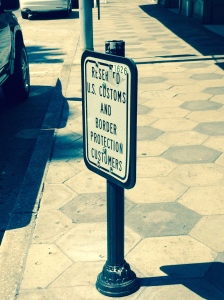 You have to take a good look at this picture to understand why I found it of interest.  And no, we didn’t go in.
Dang.

I don’t remember who this guy was.  I could totally make up something, but I don’t have the energy at the moment.  Use your imagination.

And this …… well, this bordered on insulting.  Because really?  A stripper version of the Statue of Liberty?
Someone needs to get punched.
Maybe that’s just the New Yorker in me.

And this is self-explanatory:

This was a cruise ship with a couple of awesome-looking water slides. It was very, very tempting. But we kept going: 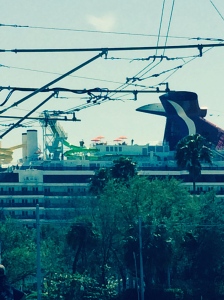 Sunday evening all of the people from the board who were still in town went to dinner.
We were pretty tired.  Which mostly explains the second picture: 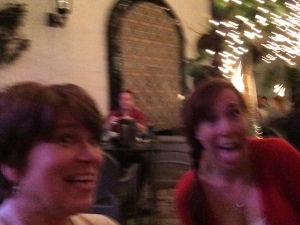 I left for NY on Tuesday.  I got in at around 12:30, got to the the apartment around 2:00, left at 2:30 to go to my volunteer job in Harlem, got home around 5:00, and left with Daughter #3 to go to the Tenement Museum with the Manhattan Women’s Club.  We toured one of the apartments and then had a tasting dinner from several local ethnic restaurants.  It was a lot of fun and very informative.  I love learning stuff like that …… about the history of an area.         We had a really good time.

The next day I went to our book club meeting, did laundry, packed and left for the airport at 5:00 in the afternoon.  My flight left at 7:00 and I got into Houston at 10:00.
It was a very long day.

Yesterday I went to the orthodontist, where I finally got those dang rough bumps taken off of my teeth (kind of “sanded” off …… not that much fun), had impressions made for final retainers to wear at night, and then told that I’m done with wearing anything during the day now.  WHOOP and DOUBLE WHOOP!!!  My teeth feel so much better now that those bumps aren’t rubbing against my cheeks or the inside of my mouth.  And I’m SO glad to be out of the Invisaligns!!

After that I went house hunting.
It was a good hunt.

Then I went to the Houston Symphony with my friend Lori. We went to dinner at a “hole-in-the-wall” restaurant, which was located in a very sketchy area.
And no, I’m not being dramatic.
Here’s the entry to the restaurant: 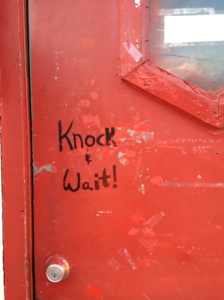 And yes, you really do have to knock …… and wait.
Kind of like a speak easy.
But without the thrill of doing something illegal.
Or so I imagine.

Here’s a picture of the outside.
Oh, and the food was very good. 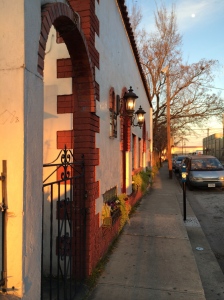 Then we went here: 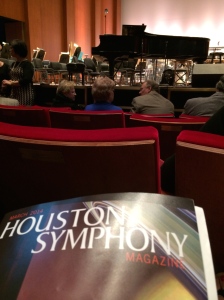 We had a great time.  Steve Tyrell was the host of the evening and he sang a lot of old, wonderful songs, accompanied by the excellent Houston Symphony.
And then there was intermission.
He came back, sang a song, and then everything went dark.
Very, very dark.
We thought it was part of the show. It was not.
Oh, and the sound went out …… along with the lights.
And they stayed out.

The guy playing the trumpet started playing after several mysterious and funny minutes, when we all realized this was not supposed to be happening. And so the singing started again. With the pianist using a borrowed cell phone for light.
And the orchestra just sitting there, twiddling their thumbs.
Or so I suppose.

The light that you see here is light from the first row …… and their cell phones. They turned them on and pointed them at him so that he could see …… and we could see him.
It was a riot.
🙂

I played tennis this morning and it was glorious.  The weather was cool, the sky was blue and the sun was shining.
We played three sets and I’d love to tell you that I played gloriously, but …… not so much.
However, on the bright side, I didn’t suck as much as I anticipated …… for someone who hasn’t played tennis since the first of November.
So there’s that.

Tonight I went to dinner with two of my lovely Circle friends and Daughter #2, who drove in from Waco today. Son #1 is also driving in this weekend.
It was a fun night.

I’m now sitting here with D#2’s dog, RG. He’s pretty relaxed.
Which is a rare thing. You can usually find him bouncing all over the house.
Literally.
He bounces higher than a kangaroo.
Or at least a small kangaroo.

I think that catches you up.
At least as much as I want to catch you up.
🙂

And now I shall leave you with some really cool pictures that I took from the plane on the way to Houston. We were up above the clouds and the sun was setting.
And I couldn’t stop taking pictures.
I hope you enjoy them.
🙂 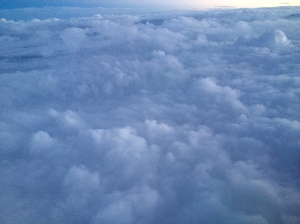